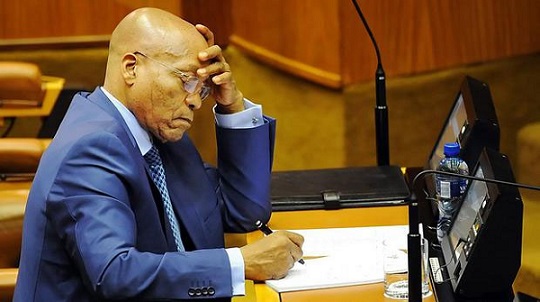 Embattled South African President Jacob Zuma resigned Wednesday night in a televised address to the nation, after his governing African National Congress party had threatened him with a vote of no confidence in the national parliament on Thursday over a corruption scandal.

The move comes just days after the Catholic bishops of the country called on Zuma “to act as an elder statesman and to put the good of the country first.”

On Wednesday, police raided the home of prominent business associates of Zuma who are accused of being at the center of corruption scandals that have infuriated the country, hurt the ANC’s popularity and weakened the economy. An elite police unit entered the compound of the Gupta family, which has been accused of using its connections to the president to influence Cabinet appointments and win state contracts. The Guptas deny any wrongdoing.

As the Gupta-linked investigation proceeds, Zuma also could face corruption charges tied to an arms deal two decades ago. South Africa’s chief prosecutor is expected to make a decision on whether to prosecute Zuma on the old charges, which were reinstated last year after being thrown out in 2009.

In his televised address, Zuma said he disagreed with the way the ANC had acted towards him.

“Even though I disagree with the decision of the leadership of my organisation, I have always been a disciplined member of the ANC,” Zuma said. “As I leave I will continue to serve the people of South Africa as well as the ANC, the organization I have served… all of my life.”

On Feb. 5, the nation’s Catholic bishops issued a statement calling “on all engaged in political decisions regarding in particular the future role of President Zuma to exercise calm and patience,” and warning of “new and dangerous tensions” appearing as the ANC “storms through a period of transition.”

“Already opposing groups are gathering on the streets, whole provinces are becoming agitated and if these tensions are not resolved with goodwill the political climate will be further poisoned for generations. Without a quick decision the new administration of the ruling party will be judged as disunited and vacillating,” the bishops’ statement read.

“We call on President Zuma to act as an elder statesman and to put the good of the country first. The Catholic Bishops also appeal to all South Africans to pray for stability and justice. We pray that the ruling party find a quick solution to the present problem of transition of power for the sake of our people who struggle with poverty and unemployment,” the statement concluded.

“They want to see him gone and they want to see the economy of the country and all the other issues dealt with, issues that cannot be dealt with as long as Zuma is in power,” he told Vatican Radio on Feb. 6.

Former Deputy President Cyril Ramaphosa, elected as the ANC’s new leader in December who now takes over from Zuma, has said the government will do more to fight the corruption that has damaged the ANC, which has led South Africa since the end of white minority rule in 1994.

In a speech on Sunday, Ramaphosa said the government will wage a “relentless war against corruption and mismanagement of the resources of our country” and that the justice system will punish the guilty.

Many people see the move against Zuma as an effort to strengthen the ANC’s position ahead of a 2019 general election. The constant corruption scandals have hurt the image of the party, which once could confidently win based on its role in ending apartheid. Recent opposition gains have party leaders worried.

“We are determined to rebuild the confidence of our people in the public institutions of our country and to restore the credibility of those who are elected to serve in those institutions,” Ramaphosa said.

Father Peter John Pearson, the head of the Parliamentary Liaison Office of the Southern African Catholic Bishops’ Conference, said the current crisis is “a wake-up call that says that even if you had the moral high ground temporarily, the strength of a nation is in how quickly it sees the need and in how much political will it has to return to that ground and to rebuild the lost ground.”

In a Feb. 9 interview with Vatican Radio he said Ramaphosa “is the one person in the country who has the cards that are necessary” to rule at the moment.

“The middle class appreciate his skill, his mind for business, his fair play – he is seen as a friend of business,” Pearson said.

Although Catholics only make up around 6 percent of the country, he said the bishops are heard by the South African government.

“We know that our voice has resonance only to the degree that we work consistently at it, that we build up a reputation of having a broad spectrum of interests, and that we are able to produce very viable kinds of arguments… to that degree we are certainly appreciated,” the priest said.

This article incorporated material from the Associated Press.