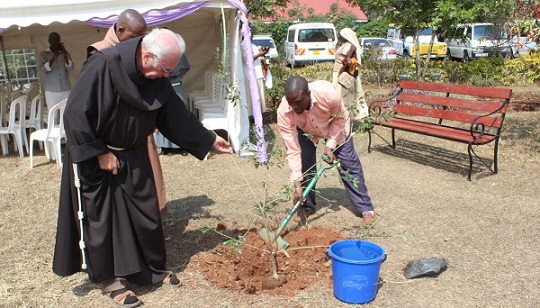 The various religious orders that follow the spirituality of St. Francis of Assisi, popularly known as the Franciscans, joined together Saturday, September 2, for their annual Franciscan Family Day gathering during which the members acknowledged Father Hermann Borg of the Order of Franciscan Minor (OFM) for his great achievement in environmental conservation.

In a ceremony that was presided over by Kenya’s First Lady, Margaret Kenyatta in July 2017, Father Borg, a native of Germany, was among the recipients of the “2017 Tree Growing and Forest Conservation Awards” and received the “Unsung Hero” award following his involvement in planting 1 million trees the Kenya’s Subukia Valley.

The chairperson of the Franciscan Family Association (FFA) in Kenya, Sr. Mary Benigna Aoko of the Franciscan Sisters of St. Anna (FSSA) acknowledged with appreciation Fr. Borg’s efforts in environmental conservation during their annual gathering saying, “One member of our family Fr. Hermann Borg, received recognition in Colombia for his work of planting a million trees for preservation of mother earth. Through his efforts, he makes the mother earth a place fit for people to live in by following the footsteps of our father Francis.”

Asked in an interview about what motivated him to begin planting trees, Father Borg said, “I am not a trained ecologist in any way; I have not studied anything in relation to conserving the environment; I have no knowledge of the names of the trees or bushes. All I know is that it is our responsibility to conserve nature and I need to do a lot as a person.”

He continued, “When I was in lower Subukia over thirty years ago, the dust was too much and there were no trees around. I did not know what it would mean to plant trees, but I thought it would be the best thing to do at that time to change the face of Subukia. So we started planting trees with my brothers in the compound of schools, Churches, out-stations and along the roads, but the results we see today is overwhelming we could not have imagined.”

In Kenya, Father Borg has been nicknamed “Baba Miti,” which can be loosely translated as “father of trees.”

“I feel happy today because about 30 to 40 thousand trees are planted in lower Subukia yearly, and those living in upper Subukia are also planting many trees annually,” he added.

Father Borg challenged all those following the spirituality of St. Francis of Assisi to become role models in the conservation of the environment saying, “The Franciscan Charism in the different Franciscan entities is generally not lived to the full; the attitude of living together as community is well embraced but the involvement in activities is quite limited; formation programs are narrowed to spirituality, and prayer life but performance of activities is insufficiently included in these programs.”

Father Borg continued, “We should know that when we protect nature, there is calmness which brings peace, positive influence and new self-awareness,” and added, “Through this inner peace, we get transformed and are able to spread this peace to others.”

Meanwhile, the Apostolic Nuncio to Kenya and South Sudan, Archbishop Charles Daniel Balvo who graced the FFA gathering, which took place in Langata, Nairobi, encouraged the Franciscans in Kenya to value interpersonal relationships among themselves.

“Invest in one another for building up the community of the Church,” the Nuncio encouraged the Franciscans in Kenya who had gathered for the Eucharistic celebration and added, “Remember as Franciscans, you are called to respect, care and love all creation.”

The Franciscans’ acknowledgement of Father Borg’s efforts in environmental conservation happened days after the Kenyan government started implementing a ban on the use of plastic bags on August 28.