Could Zimbabwe be on brink of a transformative ‘Catholic moment’? 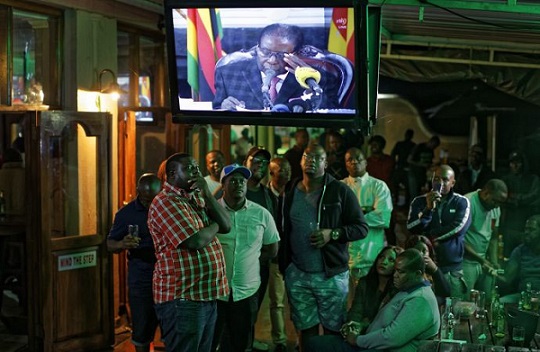 Could Zimbabwe be on brink of a transformative ‘Catholic moment’?

Looking back over the 20th century, there clearly were certain moments when inspired Catholic leadership, either in Rome or in the trenches, and sometimes both, galvanized the Church in ways that triggered the transformation of entire societies.

The role played by key Catholic statesmen in building a new order for Europe after World War II is one example, as is the pivotal contribution of St. Pope John Paul II and the Solidarity movement in Poland to the largely peaceful collapse of the Soviet empire.

Latin America in the 1960s, 70s and 80s, when the liberation theology movement played a part in bringing down military governments and police states, along with the “People Power” movement in the Philippines in the 1980s that swept the Marco regime from power, offer further cases in point.

Trying to figure out where such a transforming “Catholic moment” might erupt today, Zimbabwe doesn’t necessarily seem the most obvious candidate. Although 87 percent of the population is Christian, Catholics are a minority at just around ten percent, so the Church’s social influence is obviously different from places such as Poland where it’s an overwhelming majority.

The complexities of Zimbabwe and the Robert Mugabe regime have defied the best efforts of a couple of generations now of diplomats and activists to help chart a new course, and there’s little reason in the abstract to believe that the Church might succeed where others have failed.

Still, there are intriguing reasons to believe right now that a determined effort by Catholic leaders might actually make a difference.

For one thing, a period of transition obviously seems to be at hand. Although the 93-year-old Mugabe declined to announce his resignation in a national address Sunday night, he’s now facing an impeachment push led by members of his own party, and meanwhile the military appears to have isolated him and taken effective control of the country.

Of course, Mugabe’s been counted out several times before and always found a way to survive, but there’s a strong sense now that a “post-Mugabe” era is beginning to dawn.

For another thing, Mugabe himself “speaks Catholic.” He was born near the Kutama Jesuit Mission located about 50 miles south of Harare, the capital city of Zimbabwe, and grew up in a practicing Catholic household. He attended schools run by the Marists and the Jesuits, including the country’s prestigious Kutama College.

When he was fighting against the Ian Smith regime in what was then known as Rhodesia in the 1960s and 1970s, Mugabe apparently would carry a rosary in his pocket and would frequently pray the rosary when he moved around by car.

According to Father Fidelis Mukonori, a Jesuit priest in Zimbabwe who’s been a close friend and adviser of Mugabe for decades, he still takes those Catholic beliefs seriously today.

“I don’t think people knew how much he dedicated himself to the spiritual life which he still believes very fervently, very strongly today,” Mukonori told Zimbabwe’s national newspaper The Herald.

“The number of attempts on his life, the number is incredible; during the war, after the war: Is it his own cleverness, is it the excellence of his State security apparatus?” Mukonori asked. “I am sure it is God who has saved his life.”

Whatever one makes of Mugabe’s sincerity in light of his dubious track record, it does indicate that Mugabe is conversant with Catholic thought and argot, and has points of contact within the local Church who, at least theoretically, could serve as intermediaries. At the moment, Mukonori is leading a negotiating team between Mugabe and military officers in an effort to figure out what comes next.

Finally, the bishops of Zimbabwe aren’t exactly shrinking violets, and have a history of outspokenness about the common good and the defects of Mugabe’s regime that suggest they may be poised to play a leadership role in whatever transition comes next.

The legendary Archbishop Pius Ncube, who led the Archdiocese of Bulawayo from 1998 to 2007 and who’s 70 today, is probably the best-known example. He’s an outspoken critic of the regime, who in 2005 called for a peaceful uprising to drive Mugabe from power. In turn, Mugabe has called Ncube a “half-wit” and a “liar,” and one of Mugabe’s ministers at one stage referred to him as a “mad, inveterate liar,” who “fits into the scheme of the British and Americans, who are calling for regime change and are feeding him with these wild ideas.”

In 2007, an adultery lawsuit was filed against Ncube by a woman who claimed they had an affair while she was estranged from her husband, and she was seeking the equivalent of about $150,000 in damages. Ncube denied the charges, and some suspected a government-orchestrated “honey trap” to diminish his political influence.

Pope Benedict XVI accepted Ncube’s resignation in September 2007 in a bid to spare the Church in Zimbabwe further embarrassment and he’s largely remained out of the spotlight since, but his legacy is very much alive in the memories of many Zimbabwean Catholics.

As a whole, the country’s bishops generally try to strike a stand that’s at once both balanced but also prophetic.

In a Nov. 19 statement signed by conference president Bishop Michael Bhasera of Masvingo, vice president Archbishop Robert Ndlovu of Harare, and others, the bishops asked people to “refrain from all lawlessness or any mass action that might worsen” the political situation, but also insisted that any transition must happen through normal democratic processes and not down the barrel of a gun.

If the Catholic leadership of Zimbabwe steps up, we may come to remember this as the moment when a long-troubled African nation joined the ranks of great Catholic examples of fostering social change. Whether that will actually happen is anybody’s guess, but the opportunity clearly is there.