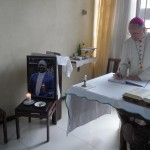 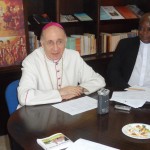 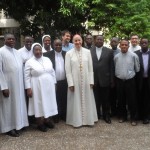 The Church in Africa has been urged to do more in the area of evangelisation by putting into practice the Gospel message and not to rely only on words without facts or deeds. Addressing the closing session of a continental Workshop on Small Christian Communities in Accra, Ghana today, the Apostolic Nuncio to Ghana, Archbishop Jean-Marie Speich challenged Christians be like Christ- the Incarnate Word.

He pointed out that it was not enough for meetings or workshops to come up with propositions or decisions that cannot be put into practice, adding that “we have had enough of speeches, talks and presentations”. What was needed, he stressed, was Christian Communities which did not have arm-chair members but rather people working for the progress of the Church in Africa.

The Nuncio emphasised that, Christianity is to a great measure an African Traditional Religion. He explained that the Holy Family fled to Egypt where they were given protection, therefore, Christianity should not be seen as a foreign religion but one in which Africa shares in its founding. “Christianity did not come to Africa, it was also born in African.”  He reminded the participants that the Holy Family is Patron of Small Christian Communities.

Archbishop Speich also advised the participants coming from 12 different African countries and representing five of the eight Episcopal Regions of Africa not to be swayed by modern ideologies but keep to their African Identity.

The four-day (November 22-25, 2014) workshop with the theme: Small Christian Communities, Moving toward an African Year of Reconciliation and Sharing Experiences with Other Churches was officially opened by Rev. Fr.  Joseph Komakoma, Secretary General of the Symposium of Episcopal Conferences of Africa and Madagascar (SECAM).

The workshop was also seen as a form of preparations for involving SCCs on the continent in coming up with strategies toward the celebration of the African Year of Reconciliation the dates of which will be announced soon.

Mr. Michael Meyer, of the Theological Department of MISSIO, Aachen in his presentation commended the Church in Africa for working on the formation or revitalisation of SCCs at all levels of the Church on the continent. He however advised that in order to sustain such communities and make them more vibrant there was the need to create a platform or system for them to network.  Mr. Meyer also gave a brief presentation of the current situation of the Church in Germany, which he said was going through some challenges.

Presentations were made on the following sub-themes during the Workshop:
a)     The Theology of Small Christian Communities and the need for Reconciliation in Africa in the Light of Africae Munus by   Rev. Fr. Ignace NDONGALA, A Theologian from DRC working in Canada.
b)    The Biblical Apostolate at the Service of Reconciliation in Africa by Fr. Yves-Lucien Evaga Ndjana, Director of BICAM, SECAM Secretariat.
c)     Small Christian Communities Strengthening the Local Church at the Base through Inculturation and Dialogue in the Spirit of Ujamaa in Kigoma, Tanzania by  Rev. Fr. Ferdinand BARUGIZE, Kigoma Diocese, Tanzania.
The Workshop organised by SECAM in collaboration with MISSIO, Aachen, Germany also had reports from experts on SCCs from some countries in the African continent, for example, Congo Democratic Republic, Cote d’Ivoire, Ghana, South Africa and Tanzania.

The participants concluded the Workshop with a number of recommendations which included the setting up of SCCs where they do not yet exist. A  Working Group would be constituted to work out the modalities for a follow-up Workshop in 2015 in Burkina Faso.

The Eucharistic Celebration of the opening ceremony and the workshop itself were dedicated to Rev. Fr. Pierre Ile Bosangia, First Deputy Secretary General of SECAM who died in the course of preparing for the Workshop on November 11, 2014. He has since been buried in his home country, DRC.