Archbishop Mbilingi has been re-elected President of SECAM

PRESS RELEASE FROM THE COMMUNICATIONS OFFICE OF SECAM

Archbishop Mbilingi has been re-elected President of SECAM

The 17th Plenary Assembly of the Symposium of Episcopal Conferences of Africa and Madagascar (SECAM) has ended today in Luanda, Angola with the re-election of Most Rev. Gabriel Mbilingi of Lubango, Angola as President of SECAM for a second term. First Vice-President: Most Rev. Mathieu Madega Lebouakehan, Bishop of Mouila, Gabon. He replaces Bishop Louis Portella-Mbuyu, Bishop of Kinkala, Congo Brazzaville, who did not stand for re-election.

Most Rev. Anton Sithembele Sipuka, Bishop of Umtata, South Africa, replaces Most Rev. Gabriel J. Anokye, Archbishop of Kumasi, Ghana, who also did not stand for re-election in order to concentrate on his office as President of CARITAS Africa.

The Archbishop of Accra, Ghana, Most Rev. Charles G. Palmer-Buckle has been reconfirmed as the Treasurer of SECAM.

The appointment of Most Rev. Emmanuel Badejo of Oyo diocese, Nigeria last year as the President of the Pan- African Episcopal Committee of Social Communications on the Standing Committee of SECAM has been confirmed by the Assembly. 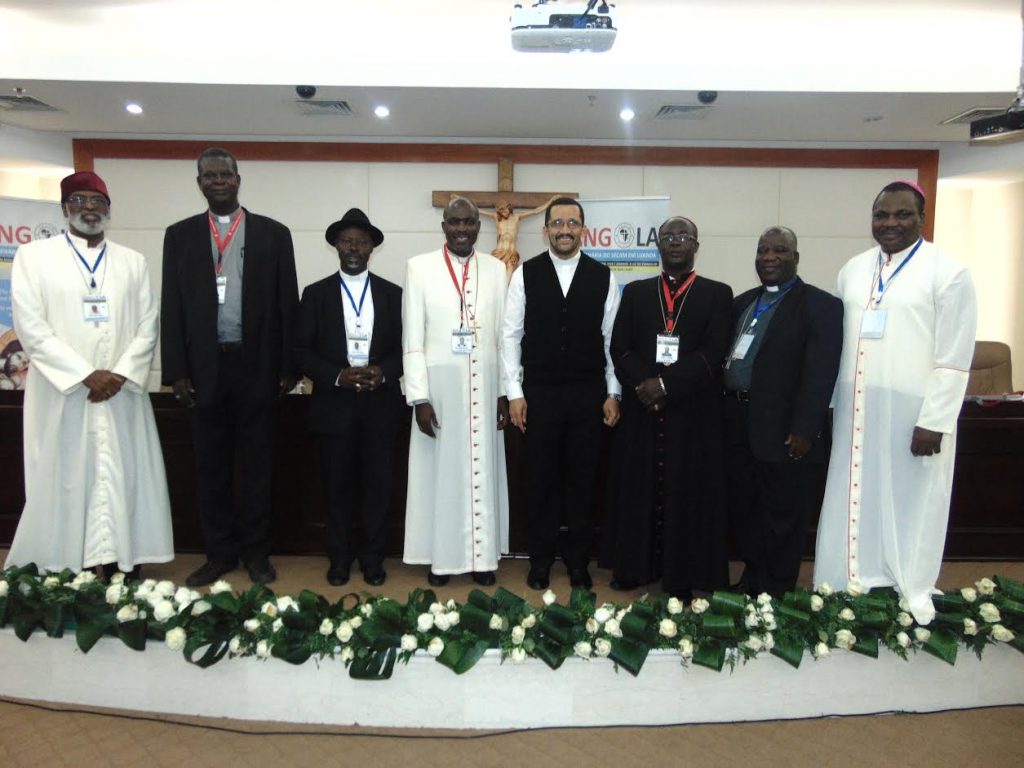 The New Office bearers of SECAM Fourth from Left is Archbishop Mbilingi, on his right in a black hat is Bishop Madega, on the left of the President is Bishop Sipuka. The others ( from left to right) are Archbishops Palmer-Buckle, Kleda, Anokye & Msusa and Bishop Badejo.

The Assembly, held from July 18-24, 2016, had as its theme: The Family in Africa, Yesterday, Today and Tomorrow: In the Light of the Gospel. The theme was chosen with particular reference to the two recent Synods on the Family and the Post-Synodal Apostolic Exhortation: Amoris Laetitia.

The Assembly was opened with an Eucharistic Celebration at the Holy Family Parish in Luanda. It was presided over by the President of SECAM, Archbishop Gabriel MBILINGI of Lubango, Angola on Tuesday, July 19, 2016.

The Vice-President of Angola, Ing. Manuel Vincente was the Guest of Honour during the official opening ceremony. He appealed for closer collaboration between the Church and State for the promotion of integral development on the continent of Africa.

The first part of the Assembly comprised Talks and Workshops for the bishops on some topics of the sub-theme: New Pastoral Challenges Facing the African Family Today and Finding New Ways of Evangelising the Families. The topics were: a) The Case of Cape Verde by His Eminence, Arlindo Cardinal GOMES FURTADO, Archbishop of Santiago of Cape Verde Verde). b) The African Perspective by Most Rev. Emílio SUMBULELO, Bishop of Uije, Angola; and c) Influence of Modern Media and New Ideologies on the Family in Africa Today by Most Rev. Emmanuel A. BADEJO, Bishop of Oyo, Nigeria and President of the Pan-African Episcopal Committee for Social Communications (CEPACS).

A general topic on: Making SECAM a Stronger and more Committed Family of God in our Continent was presented by His Eminence, Philippe Cardinal OUEDRAOGO of Ouagadougou, Burkina Faso.

The Assembly was also an opportunity for the bishops to discuss various issues pertaining to the Family in Africa, new ideologies, inter-religious dialogue, and the socio-political situation on the continent.

The participants at the Plenary denounced the state of instability and insecurity in some African countries – South Sudan, Burundi etc., and appealed to political and other civil authorities to ensure peace, democracy and good governance.

The second part of the Assembly was the business session where, reports from the various Commissions/Departments of SECAM Secretariat were presented in plenary session. Other reports received were those from CARITAS Africa, SECAM-AU Liaison Office in Addis Ababa, Ethiopia; the Catholic News Agency for Africa (CANAA),Documentation and Information Management, and the New Features of SECAM’s website.

The Assembly adopted a number of Resolutions and Recommendations; a Final Message and a Communique addressed to all people of goodwill. (See full text of the Message attached).

SECAM’s 17th Plenary Assembly concluded with the celebration of the Holy Eucharist.

The bishops of Africa expressed their thanks and appreciation to the Government and people of Angola, the Church and the Local Organising Committee of Angola for all the support in the holding of a successful Plenary Assembly.

The next (18th) Assembly, which will mark the 50th Anniversary of the founding of SECAM will take place in Kampala, Uganda in 2019.

The 16th Plenary Assembly was held in July 2013 in Kinshasa, Democratic Republic of Congo under the theme: The Church in Africa at the service of Reconciliation, Justice and Peace.