Continental Conference of Land Grab and Just Governance in Africa

Most Rev. Thomas Msusa, Archbishop of Blantyre, Malawi has called on participants attending a continental Conference in Nairobi, Kenya on Land Grabbing and Just Governance to turn their lens of advocacy on the Church and other religious bodies also. He intimated that issues of land grab might possibly be found in the Church by way of the Church and its Agents acquiring land but not putting it to productive use. He noted that for instance, where the Church acquires fertile agricultural lands without using them for years, such lands could be given to the poor and marginalized to improve their livelihood. 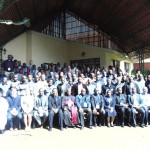 A group photograph taken after the opening ceremony of the Conference 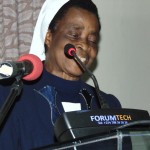 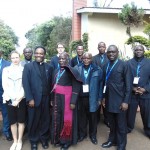 Some of the organisers of the Conference

Archbishop Msusa, made this appeal in a welcome message he delivered on behalf of the President of the Symposium of Episcopal Conferences of Africa and Madagascar (SECAM) Archbishop Gabriel Mbilingi, at the opening ceremony of the Conference, today. He noted that in most cases Advocacy Groups place more focus on politicians and business people regarding land grab without looking at what is sometimes happening within the religious bodies.

Archbishop Msusa who is also a member of the Standing Committee of SECAM and Vice-Chairman of the Association of the Member Episcopal Conferences for Eastern Africa (AMECEA) explained that there are cases where dioceses and religious congregations sometimes engage in infightings regarding the acquisition and ownership of land. A situation, which he says must stop.

He added that both the Church and State have the duty to deal with the issues of land grab, prevent its destruction and work together for the development of their people instead of fighting over the acquisition of land. “Positive Change will come about through each and every person’s heart and by championing just governance and the creation of awareness on the right to sustainable development. We also have a moral duty to address the issues of Climate Change with particular reference to the latest encyclical of Pope Francis- Laudato Si.” He emphasised.

Commenting further on the matters relating to justice, Archbishop Msusa urged the Church to improve the salaries of her workers particularly where the salaries of such workers are below the official minimum wage.

In a Keynote Address on Laudato Si and Chrisitian/Biblial Perspective on Land, Rev. Sr. Teresa Okure, SHCJ, Professor Emeritus of the Catholic Institute of West Africa (CIWA) in Nigeria said that every measure that is taken regarding the issue of land grabbing should be rooted in the biblical context. Scripture, she pointed out, is replete with examples of how to deal with such situations. She therefore called for collaborative efforts and networking to finding answers to the numerous challenges associated with land grabbing. “We are all part of the problem and therefore have to work together in addressing this phenomenon, because land is the very construct of our being.” She cited biblical texts to prove this point.

Fr. Okure noted that Land Grab is as a result of poor governance, greedy competition and corruption on the African continent which often leads to the displacement of people. “The real work or action should be intensified soon after the Conference. We have to hit the ground running,” he stressed.

Fr. Paquete on his part asked the participants not to dwell too much on the documents that would be produced at the end of the Conference but rather look at what they will do in their various countries.

There were goodwill messages from AMECEA, read by its Secretary General, Rev. Fr. Ferdinand Lugonzo; and the Justice and Peace Commission of the Kenyan Bishops’ Conference.

The Member of Parliament( MP) for Limuru Constituency, where the Conference is taking place, Hon. Eng. John Kiragu Chege, in an earlier welcome address assured the participants of their safety. “There is no need for you to have any fears about the terrorist attacks in Garisa in the North East of Kenya, or what happened recently in Paris, France and Bamako, Mali. We have put in place enough security measures for your stay here in Nairobi, he again assured them.

The Conference will also have presentations on the following subjects: Land Reform; Mining; Climate Change, Environment, and Deforestation. Others are: State of Land Grabbing in Africa; and The spirituality of land in African culture.