Press Release from the Communications Office of SECAM – June 27, 2016 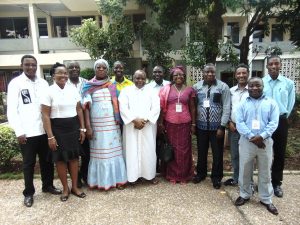 Participants of a three-day Consultative Workshop on Climate Change Adaptations and Food Security that took place in Accra that from, June 22 to 25, 2016, have appealed to the Symposium of Episcopal Conferences of Africa and Madagascar (SECAM) to consider the sustainability of food security, the multi-stakeholder partnership with the involvement of beneficiaries and the sharing of the learning and best practices for greater impact of the Church interventions.

This was contained in a Communique issued at the end of workshop attended by a ten-member Working Group. The Group also made some recommendations for SECAM for consideration as the contribution of the Church in Africa to the ongoing effort of the AU Members states and its development partners towards the implementation of the Africa Agenda 2063 within the context of the Sustainable Development Goals (SDGs) and the Paris Agreement on Climate Change.

The Consultative Workshop also took stock of the major activities undertaken by Episcopal Conferences in Africa on the issues of climate change adaptations and food security in line with Encyclical of Pope Francis on the Environment: Laudato Si.

There was a revision of the Term of References (ToR) and the Operational Plan – linking with the climate change adaptations and food security- of their Working Group for the next three years (2016-2018) which will help in monitoring the implementation of the Paris Agreement on Climate Change at all levels in line with commitments made by respective African states at the COP21 Conference.

The Participants promised to strengthen and facilitate the information sharing of Church involvement in Advocacy on issues related to climate change adaptations and food security and networking among the members of the Group.

The Workshop was officially opened by the Secretary General of SECAM Rev. Fr. Komakoma; he did this in the name of the President of the President of SECAM, Most Rev. Gabriel Mbilingi and the Second Vice-President, Most Rev. Gabriel Anokye who is the Episcopal Chairman of SECAM Justice, Peace and Development Commission under which the Workshop was organised. Mr. Firmin Adjahossou, a Programme Officer of that Commission coordinated the Workshop.