Catholic Journalists in Malawi Promise to Work for the Church 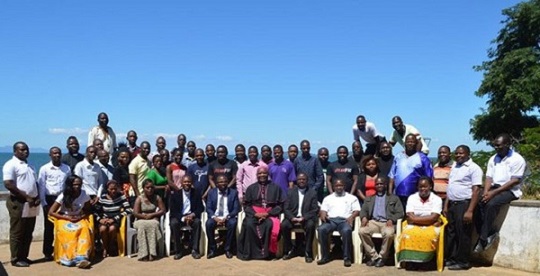 Catholic Journalists in Malawi Promise to Work for the Church

The Association of Catholic Journalists (ACJ) a grouping of professional Catholic Journalists in Malawi last weekend held their first ever Annual General Meeting (AGM) in the Lakeshore district of Salima where a new national executive committee was elected to stir the operations of the organisation in the next three years.

During the elections, Augustine Mulomole became the new President for the association replacing Deogratias Mmana.

In his acceptance speech as the new President, Mulomole said he along with his committee strive to work for the good of the association and at the same time make it vibrant.

“We are committed to work for our mother Church through our various skills. We will work with the Episcopal Conference of Malawi and of course seek guidance wherever necessary,” said Mulomole.

Taking his turn, out-going President, Mmana said he was delighted to hand over the mantle of Presidency for the new executive committee describing it as a team full of experience journalists which take the association to the greater heights.

Meanwhile, the association’s executive committee has lined up a number of activities for carry out from now.

In a communique released by the associations General Secretary, Kapatuka, the executive committee plans to meet the national Communications Team in a week beginning 8th May 2017 to brief them on ACJ Action Plan.

“The executive committee will develop a communications strategy for implementation of the action plan. A budget for the action plan to be developed. All the regional chapters have until end May to hold elections,” reads part of the communique posted on Malawi Catholic Journalists WhatsApp forum.

The communique further states that registration of members will start immediately after the elections with payment of K5,000 as membership fees hence all the membership fees to be deposited into the ACJ national account

“Regional Chapters are to be paying subscription fees to the national committee of K5,000 per quarter or K20,000 per year. All regional chapters should be working very closely with Diocesan Communications Secretaries,” said Kapatuka.

National Social Communications and Research Commission’s Secretary, Fr. Godino Phokoso has pledged his support toward the new executive and the association as a whole.

Among the objectives of the association include; collecting information for the Catholic church as required by the Episcopal Conference of Malawi and also monitor developments and problems facing the church in evangelization; strengthening ties among Catholic journalists and disseminate information through constant debate and dialogue.