Celebration of the Golden Jubilee of Dei Verbum

The First Vice-President of the Symposium of Episcopal Conferences of Africa and Madagascar (SECAM), Bishop Louis Portella Mbuyu, has said that the celebration of the Golden Jubilee of Dei Verbum gives each and every one the opportunity to reflect on what has been achieved in the past and the great work that still lies ahead in the evangelisation effort of the Church in Africa.

Bishop Louis Portella Mbuyu made these remarks at the opening ceremony of a continental celebration to commemorate the Golden Jubilee of the publication of the Dogmatic Constitution: Dei Verbum in Kigali, Rwanda on November 10, 2015.

He said that the bishops of Africa in 2013 during their 16th Plenary Assembly in Kinshasa DRC stressed the need to deepen evangelisation in the faithful through the biblical apostolate, justice, peace, reconciliation, Good Governance and indeed the integral human development in Africa. These areas, he said, are some of the challenges confronting Africa.

He therefore called for new forms and means of proclaiming the word of God for promoting not only the biblical apostolate but the general evangelisation efforts of the Church in Africa.

He expressed the gratitude and appreciation of SECAM to the Episcopal Conference of Rwanda for having hosted the celebration.

During the opening Eucharistic celebration Bishop Louis Portella Mbuyu, who is also the bishop of Kinkala diocese in Congo Brazzaville, stressed that it was “not enough to proclaim the word of God without putting it into practice in every Christian’s daily life.” The word of God, he added, has to be lived in every person’s daily activities and in communion with other people.

The Golden Jubilee celebration which is from November 9-14, 2015, has as its theme: Dei Verbum, a Milestone in the Church (DV nr.3)- Exegetical, Theological, Spiritual, Pastoral and Ecumenical sphere in the Life of the Church in Africa.

He appealed to bishops in Africa to give the biblical Apostolate the priority it deserves. He alluded to the recommendations of the CBF Plenary Assembly in Bogota, Columbia of 1990 which came to be fulfilled in 2008 with the holding of a synod properly on the Word of God. He also stressed the need of the Incarnate or contextualized reading of the Word of God.

For a more effective realization of the Apostolate in Africa, he recommends the decentralization of the coordination of the Biblical Apostolate. This, he elaborated could be done through the activation of the zonal coordinators to reflect local realities since Africa is large and need to be divided into zones. The vitality of CBF or that of Africa, he added, depends on the collective effort of all their members and the establishment of regional offices to support the continental Coordinator of BICAM.

Rev. Fr. Yves-Lucien Evaga Ndjana, Director of Biblical Centre for Africa and Madagascar (BICAM), took the participants through the theme of the celebration and the main issues raised in Dei Verbum.

The participants were welcomed to Kigali by the President of the Bishops’ Conference of Rwanda, Bishop Smaradge Mbonyintege, of Kabgsyi diocese. He also called for closer ecumenical collaboration on the continent particularly in the biblical apostolate.

The Opening ceremony was climaxed with the enthronement of the Word of God in the Conference Hall of St. Paul’s Centre, Kigali. This was followed by a sermon given, in the spirit of Ecumenism, by Rev. Canon Emmanuel Kayijuka, of the Anglican Church in Kigali.

Present at the ceremony was the Archbishop of Kigali, Most Rev. Thaddeus Ntihinyurwa; the Episcopal Chairman of the Biblical Apostolate of the Conference of Rwanda, Bishop Vincent Harolimana; Bishop Philippe RUKAMBA Butare; and Bishop Antoine Kambanda, Kibungo diocese.

The official participants included Exegetes, theologians, pastors and lay people from about 20 African countries and observers from a number of countries outside Africa.

Also present were, priests, Consecrated Men and Women, Seminarians, the laity and Ecumenical Biblical Society of Rwanda and some protestant Churches.

The six-day meeting is being organised by SECAM with the support of Aid to the Church in Need and MISSIO, Aachen, Germany, two of the Partner Agencies of SECAM. It is being hosted by the Episcopal Conference of Rwanda.dei verbum1 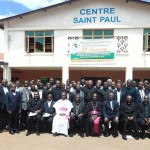 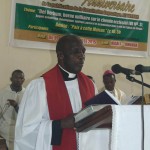 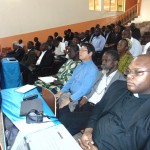