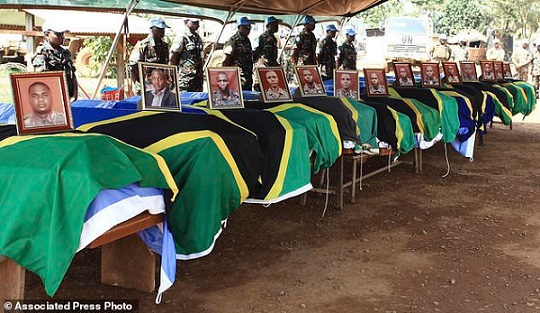 Xaverian missionary Father Loris Cattani has put the blame for an attack on UN peacekeepers in the Democratic Republic of Congo on the government.

The UN’s MONUSCO mission said the attack that took place on December 7, 2017 in the North Kivu province was carried out by suspected rebels of the Allied Democratic Forces, or ADF. The attack killed 14 peacekeepers from Tanzania and five Congolese soldiers.

Cattani, a member of the Peace Network for Congo, challenged the claim: “Those who wanted the assault are probably those who have been asking for the reduction or cancellation of the UN mission for months. That is to say, the government,” the priest told the news agency Fides.

He said he wasn’t convinced the ADF had the ability to attack a UN base, given the level of coordination in the assault.

“The UN says it was a well prepared and organized assault. First, they hit the military camp’s communications center, preventing the Blue Helmets from communicating with their fellow soldiers to request reinforcements and helicopters from the other bases. Some of the assailants seen wore uniforms of the Congolese regular army,” Cattani said.

There is a Congolese military base close by, and the solders from this base frequently visit the UN compound for food rations.

Cattani said the circumstances of the attack must be fully investigated.

On December 11, UN troops in the DRC paid their last respects to the fallen Tanzanian soldiers in a ceremony near Beni, in North Kivu province.

“The death of our Tanzanian friends shall be written in the history of the Congolese nation, in tribute to their sacrifice,” said Congolese General Leon Mushale.

“They will remain in the hearts of the Congolese people.”

The UN’s deputy special representative for the DRC, David Gressly, said the “Blue Helmets will continue to protect the people of Beni,” despite the deadliest attack on UN peacekeepers in the DRC since the force was deployed to the troubled country in 2010.

The DRC has always been afflicted by political violence, but there were renewed hopes for the first peaceful transition of power since independence, when the country’s Catholic bishops brokered a peace deal between the opposition and the party of President Joseph Kabila on December 31, 2016.

Kabila took over from his father, Laurent-Desire Kabila, who was assassinated in 2001.In 2006, an election confirmed him in his post. He was re-elected for a second mandate in 2011.

However, Kabila’s failure to step down after the end his second term in December 2016, as mandated by the constitution, sparked protests in cities across the DRC, leaving at least 40 people dead.

The New Year’s Eve Agreements called for power sharing between Kabila’s party and opposition parties in the build up to a presidential election at the end of December 2017, in which Kabila would not be a candidate.

Going by the country’s constitution, Kabila was scheduled to leave office by December 19, 2016, after the end of his second and supposedly last term.

But that deadline came and went with Kabila still in power, and the election was postponed to December 23, 2018.

In a statement Nov. 24, the bishops reminded Kabila that he was the “guarantor of the constitution,” and emphasized the importance to not to delay elections any longer.

“We urge you to reassure the public opinion by a public statement that you will not be a candidate for your own succession,” the statement said. “We are convinced that this would contribute to easing political tensions.”

The bishops said the “political imbroglio and the suffering of the population which results from it exceed the tolerable threshold,” adding that they were “deeply disappointed” that the same political tensions in the past persist even today.

“The people will not tolerate this being repeated in 2018,” they warned.

After the country’s electoral commission, CENI, announced the long-deferred election for December 2018, Kabila’s party, the Parti du Peuple pour La Reconstruction et La Democratie (PPRD), welcomed the news, saying that it marked a point of no return for moving forward the electoral process.

But the opposition has said the announcement is a distraction, and is pushing for the departure of Kabila this month, in accordance with the New Year’s Eve Agreement.

As the political bickering persists, the bishops have sought to reassure the Congolese people that “the New Year’s Eve Agreement is not dead.”

“It is and remains the only consensual roadmap to emerge from this political crisis that has lasted too long,” they said.