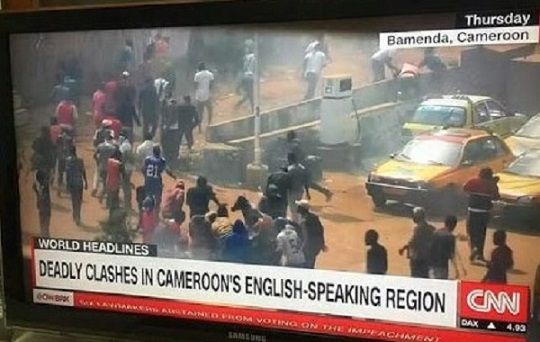 The bishops of the English-speaking areas of Cameroon have accused government forces of using live ammunition against unarmed protesters, and complained that when the government spokesperson referred to secessionists as “terrorists,” it was a “subtle call” for ethnic cleansing.

Cameroonian bishops of the Bamenda province have voiced concerns that the Cameroon government could be perpetrating “genocide” against English-speaking Cameroonians.

The bishops’ remarks came in the wake of demonstrations in Cameroon’s predominantly English-speaking northwest and southwest regions demanding independence from the rest of Cameroon, which is majority French-speaking.

Media reports claim over 20 people have been killed by security forces since October 1, although the leader of the independence movement is claiming that over 100 people died.

The current unrest began last year, when disgruntled lawyers and teachers began protesting the use of French in courts using the Anglo-Saxon common law tradition (practiced in the English parts of the country) and in Anglophone schools. The demonstrations soon spread to the general public, and the calls for outright secession started growing.

In a strongly-worded statement released on October 6, the bishops condemned “the barbarism and the irresponsible use of firearms against unarmed civilians by the Forces of Law and Order” and called on President Paul Biya to stop “the bloodbath and genocide that has skillfully been initiated in the North West and South West Regions.”

The Bamenda ecclesiastical province covers these Anglophone areas of Cameroon.

The statement accused government forces of using live ammunition against unarmed protesters, and complained that the government spokesperson and Communication Minister, Issa Tchiroma Bakary, referred to secessionists as “terrorists,” which the bishops said was a “subtle call” for ethnic cleansing.

“All Anglophones are now considered as ‘terrorists’ and as such they qualify for elimination, just because they are Anglophones,” the bishops wrote.

“We need to stop the imminent genocide! We, as a nation, need a change of orientation to forestall any further deterioration of the situation in the North West and South West Regions,” the statement said.

The bishops have said genocide begins with “the killing of one man – not for what he has done – but for who he is.”

On Oct. 9, Tchiroma Bakary said the bishops could be considered as “objective allies of secessionists.”

The government minister said the bishops had endorsed “the dangerous and wild imaginations of the secessionists” and denounced the bishops for “championing those who deliberately chose to breach the constitution and laws of the republic to incite people to question their citizenship.”

Former Cameroonian presidential candidate Bernard Acho Muna – who served as Deputy Prosecutor of the International Criminal Tribunal for Rwanda from 1997-2002 and investigated the situation in Central African Republic for the UN in 2013 – said the evidence in the Anglophone region of Cameroon was disturbing.

“Genocide is not only about killings. … The elimination of a people may be their culture and so on is part of genocide,” he said.

In March, Muna, an Anglophone from Bamenda, said that a group of lawyers are currently compiling a dossier to be deposited at an international tribunal to sue the perpetrators of “genocidal” crimes in the English-speaking regions of Cameroon.

“What I am saying is that as a Cameroonian and somebody who has prosecuted people committing genocide in Rwanda, I am aware of the gravity of genocide. And as a Cameroonian, it has not been easy for me to handle such a situation. And so, what I decided to do, in view of the evidence that we have, is to call upon the assistance of legal advisers who were Barristers in London and some of them I worked with in Rwanda,” Muna told reporters at the time.

He accused them of recruiting “hundreds of mercenaries” and importing assault weapons with the aim of carrying out mass killings in the two regions, and blaming the government for the atrocities.

Cameroon’s bilingual and bi-cultural status derived from its colonial heritage. Initially administered as a German Protectorate in 1884, Cameroon would later be shared with France and Britain as League of Nations Mandates after Germany was defeated in the First World War.

The end of the Second World War and the establishment of the United Nations saw the two parts of Cameroon transition from mandated territories to UN Trust Territories.

The results showed an overwhelming desire by English-speaking Cameroonians to reunite with the French-speaking part of Cameroon.

The “marriage” was guaranteed by a Federal Constitution that was meant to preserve and protect the minority Anglophones and their colonial heritage. But in 1972 then-President Ahmadou Ahidjo organized a referendum that dissolved the federation in favor of a united republic, thereby removing the protections Anglophones enjoyed.

Currently, Anglophones make up around 20 percent of the population.

In their statement, the Bamenda bishops said the government has “persistently failed to address [the Anglophone crisis] adequately,” accusing officials of only offering “cosmetic changes.”

The bishops are calling for what they call frank and sincere dialogue with “the right people to determine the nature and form of the state,” which by their reckoning forms the basis of the current crisis.

The bishops have declared Oct. 14 a day of mourning for the ecclesiastical province, and said requiem Masses would be said in all churches for those who have been killed in the violence.