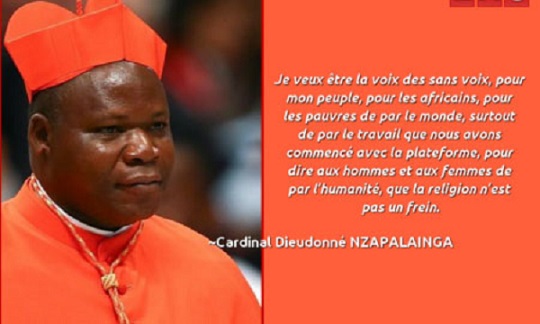 Cardinal Diudonne Nzapalainga of the Central African Republic has described 2017 as “an unfortunate year” in the country.

Of chief concern for the Archbishop of Bangui was the number of priests and other church workers killed in the country over the past year.

In his opening speech during the first 2018 meeting of the country’s bishops’ conference, the cardinal said 2017 “saw the murder and aggression of many servants of God in Bangui, but especially in our provinces: Banguassou, Alindao, Mokoyo … Churches devastated, looted or burned; faithful martyred. Last year’s toll is alarming.”

A civil war that erupted in 2012 when President François Bozize was ousted by the largely Muslim Séléka rebel movement has caused tensions between the two communities. The Séléka rebels were the next year ousted from the capital by Christian militias, called anti-balaka, which led to tit-for-tat killings between the movements.

On May 30, 2014, the transition government of the CAR referred the situation in the country to the ICC requesting that the court open investigations on alleged crimes against humanity that fall within the court’s jurisdiction committed in the country since August 1, 2012.

According to the Prosecutor of the International Criminal Court, Fatou Bensouda, information available provides “a reasonable basis to believe that both the Séléka and the anti-balaka groups have committed crimes against humanity and war crimes including murder, rape, forced displacement, persecution, pillaging, attacks against humanitarian missions and the use of children under fifteen in combat.”

The country is predominantly Christian, with 50 percent of the total population being Protestant and 30 percent Catholic. Only 15 percent is Muslim, the majority of whom live in the north of the country, which lies in Africa’s Sahel region. However, there is a significant Muslim population in the south, consisting mostly of merchants.

The southern city of Bangassou has become a flashpoint in the conflict. Rebels attacked a Muslim quarter on May 13, 2017, leaving 115 dead, including six UN peacekeepers.

The Catholic cathedral in the city has become home to some 2,000 Muslims who live under the protection of the Catholic bishop, Spaniard Juan José Aguirre Muñoz.

On July 21, 2017, the African News Agency reported that Saint-Louis Catholic parish in the central town of Bria, which is also sheltering hundreds of displaced people, had been attacked and robbed by armed men after failing to receive protection from the UN peacekeeping force.

On September 2, Father Louis Tongagnessi was murdered by armed bandits in Zemio, in the south-east of the country.

“Where are we going to? What shall the people of Central Africa become in 2018?” Nzapalainga asked his fellow bishops at their January meeting.

Even though Church leaders and Church grounds seem to be becoming new targets for attacks by militias, the Catholic Church and its leaders have remained the primary hope for those seeking refuge.

“When they see us in our cassocks, they run to us because they believe we can protect them,” Nzapalainga told Crux.

According to Christophe Droeven, country representative for the U.S.-based Catholic Relief Services, the Catholic Church is now the “only functioning structure” in many parts of the country, and both Christians and Muslims have fled to Catholic institutions for protection.

“Although religious leaders can’t stop the fighting, they can often arrange talks, negotiate with kidnappers and mediate on the front line. But the armed groups don’t distinguish between aid organizations like ours. We’re unprotected and having to be very careful,” Droeven told America Magazine.

A January 2018 report by OXFAM says the security situation is worsening and the “humanitarian situation is deepening.”

It reports 2.5 million people are in need of protection and basic services, and the humanitarian response has been slow in coming, complicating the situation.

“The worsening security situation in various parts of the country since May 2017 is creating instability and forcing vulnerable civilians to once again bear the brunt of the crisis. It has resulted in at least 249 arbitrary killings and more than 180,000 displaced persons. Today, 600,000 people are internally displaced and 482,000 are refugees in neighboring countries,” the report says.

Nzapalainga has dismissed claims by some that the violence could be drawn on religious lines.

“Were that to be the case, then you wouldn’t see Muslim and Catholic leaders working together to initiate dialogue,” he told Crux.

He said the conflict was being driven by the search for ownership over minerals. “Many people are growing richer from this war,” he said.

In the face of the escalating violence, the cardinal urges his compatriots to look up to God for a solution.

“We have faith in the great goodness of the Lord towards us, as Pope Francis reminded us during his stay in Bangui,” he told Fides, a Catholic news agency.

At the end of the bishops’ conference meeting on Sunday, the bishops called on all armed groups to “unconditionally” disarm, and urged them to stop their criminal acts.

The bishops also condemned “the slow response and inaction” of some units belonging to the UN peacekeeping force in the country.