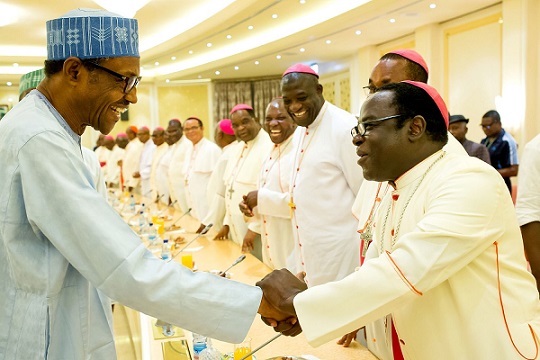 The Catholic Bishops in Nigeria have voiced the challenges the citizens of their nation are facing, ranging from the concept of citizenship to the sanctity of human life to general insecurity to the endemic rise of militia groups along ethnic lines.

The Bishops expressed this in a collective statement as the Catholic Bishops’ Conference of Nigeria (CBCN) at the conclusion of their week-long first Plenary meeting for the year 2017, which took place at Daughters of Divine Love Retreat and Conference Centre (DRACC), Abuja, from March 4 through March 10, 2017.

“Since the end of Nigeria’s tragic civil war, at no other time in the history of our dear country has the issue of our common citizenship been subjected to more strain,” the Bishops said and explained, “We have witnessed the ubiquity and the rising profiles of ethnic militias and their increasing destructive violence against our commonwealth.”

“We have found the outright disdain for the sanctity of human life totally at variance with both our cultural traditional norms and our religious sensibilities. Life has never looked so cheap,” the Bishops went on to say, adding, “Exposed to violence almost on a daily basis, more and more of our young children are losing their innocence as they watch their parents being randomly slaughtered and their properties vandalized.”

“Over the years, we have witnessed the subjugation and dehumanization of our people by a powerful elite that has continued to disregard the sanctity and dignity of every Nigerian citizen,” the statement reads in part and explains, “Consequently, we now have generations of young people facing a life of uncertainty, fear and desolation.”

Below is the full text of the Bishops’ statement.

OUR DIGNITY, OUR NATION & OUR CITIZENSHIP

A Statement of the Catholic Bishops’ Conference of Nigeria

1: The Struggle for Citizenship

Since the end of Nigeria’s tragic civil war, at no other time in the history of our dear country has the issue of our common citizenship been subjected to more strain. We have witnessed the ubiquity and the rising profiles of ethnic militias and their increasing destructive violence against our commonwealth. We have witnessed a rise in the politics of identity with our people retreating to the womb of ethnicity. Thus, rather than breathe the free air of democracy since the end of military rule, our lungs are choking amidst the fumes of violence. Insecurity has turned our country into a theatre war. Faced with landlessness, homelessness and sickness, the majority of our people do not feel that they are full citizens of our dear country.

We re-echo the words and sentiments of the drafters of our Constitution who assured us that sovereignty rests with the people and that it is from this that government derives its legitimacy. As the same Constitution makes clear, the security and welfare of the people is the primary purpose of government. The same Constitution guarantees our common citizenship and further assures us of such rights as a right to dignity, freedom of expression, freedom of religion and conscience. We are guaranteed freedom of movement but the average citizen knows that today, the contrary is the case.

We call on the federal and state governments to respect and enforce, the relevant provisions of our Constitution in order to give all of our citizens a shared sense of belonging.

3: The diminishing sanctity of human life:

We have found the outright disdain for the sanctity of human life totally at variance with both our cultural traditional norms and our religious sensibilities. Life has never looked so cheap. Exposed to violence almost on a daily basis, more and more of our young children are losing their innocence as they watch their parents being randomly slaughtered and their properties vandalised. This violence came to a head with the eruption of Boko Haram. We also note, in particular, the Killing of hundreds of Shiites in Zaria in December 2015; the killings in Southern Kaduna and the encounters involving herders and farmers across the Nigerian Savanna, which has led to thousands of killings. We pray for the safe repose of the souls of the dead and for God to comfort the bereaved and heal the wounded.

We acknowledge the progress made under the present administration in degrading the Boko Haram insurgency. Although the federal government has announced the technical defeat of Boko Haram, we have no reason to believe that they are not regrouping, nor can we discount their evolution into perhaps something more deadly, as we have continued to witness their savage, gruesome and grisly slaughter of innocent citizens. While we commend the federal government for the success registered so far, including the rescue of some of the Chibok girls, we know that until all our daughters are home, our victory is not complete We further encourage the federal government to speed up the process of resettling our people.

4: A restive nation and its youth:

Over the years, we have witnessed the subjugation and dehumanization of our people by a powerful elite that has continued to disregard the sanctity and dignity of every Nigerian citizen. Consequently, we now have generations of young people facing a life of uncertainty, fear and desolation. Graduates are unable to find jobs. With parents out of jobs, having no pension and faced with the debilitating economic situation, we are saddened our young people have been exposed to so many hazards. Today, we are losing our children to the streets, to gangs and drugs. As long as these young people roam the streets with so much despondency, so long will they remain exposed and perhaps recruited to join such evil groups like kidnappers, drug and human trafficking gangs or Boko Haram. Our nation must reverse this ugly trend in our society.

The Holy Father Pope Francis has warns that: “The worship of the ancient golden calf has returned in a new and ruthless guise in the idolatry of money and the dictatorship of an impersonal economy lacking a truly human purpose”. It is thus intolerable that our people should continue to live under so much poverty and inequalities.

We commend the President on his war against corruption. We believe, however, that this war will only be meaningful if it is owned by the generality of Nigerians. Several recent incidents have contributed to undermine the faith of Nigerians in the credibility of the fight against corruption. To restore the faith of the people in this war, we call on the Federal Government to allow an independent investigation into recent allegations of corrupt mis-conduct against senior members of the administration.

We equally call on our government to put into effect its unfulfilled commitments such as ending poverty, feeding the nation, and providing accessible education.

We underscore the importance of credible institutions for the effective protection of citizen’s rights and responsibilities and believe that a credible judiciary is indispensable for the future of Nigeria. We welcome the steps taken by the administration to end the uncertainty over the appointment of the Chief Justice of Nigeria (CJN) and transmit warm congratulations to the new Chief Justice, Walter Onnoghen. While underscoring the need for the new CJN to upgrade the credibility of the judiciary, we also call the attention of government to the need to unequivocally commit itself to the rule of law. We condemn the failure or refusal of government to obey court orders, including, notably, the disrespect of court orders requiring the release of Sheikh El-Zakzaky; Nnamdi Kanu and Col Sambo Dasuki. We call on government to return to the path of rectitude and obedience of court orders.

7: Education: collaboration for effectiveness and efficiency:

We are troubled by the state of education in Nigeria today and fear that increasingly, our capacity to compete and take advantage of the talents of our youth in this age of globalisation is severely challenged. We call on the federal and state governments to reverse the tragic policy of the take over of schools and open up channels for more effective communication and collaboration with the Church.

We commend those Governors who have wisely decided to share this burden by returning schools to their rightful owners. Those States which have reversed this decision have witnessed remarkable and measurable progress in the performance of their schools in the annual examinations. We believe that the education of our children is beyond politics.

In the area of religious freedom of worship and conscience, we are saddened by the fact that many State governments, Universities and other institutions of higher learning continue to act against the Constitution. State Governments many of the States in the north continue to refuse of Certificates of Occupancy for the construction of Churches. We call on the federal and state governments to respect the relevant provisions in the Constitution.

9: Human Rights Education as an Imperative:

There is enough in our Constitution to guarantee citizens rights and dignity. Beyond the excesses of some of the agencies of state, the lack of a culture of human rights based on citizens’ knowledge of their rights is the primary reason why injustice and tension continues in our land. We therefore call on all citizens, even at the most elementary levels to be acquainted with our rights and obligations. We therefore call on the National Human Rights Commission to liaise with Community-based organisations, civil society groups and the leaders of religious communities to expand the frontiers of culture of human rights among our citizens.

While we continue to pray for the speedy recovery of our President and for the unity of our nation, we must realize that the challenge of placing our huge resources at the service of our people, can no longer be postponed indefinitely. The equitable distribution of our resources for the common good must be the definite goal of those who hold this trust. This will help to restore our dignity as human beings and our integrity as a nation and our loyalty as citizens. God bless Nigeria.