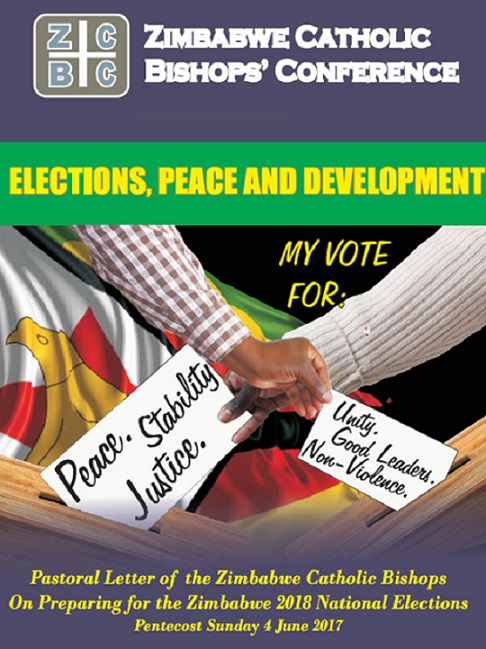 The Bishops specifically appeal to the government of President Robert Mugabe to ensure that citizens enjoy their political rights and freedom of expression.

Throughout the letter, the Bishops constantly urge political parties, the government and individuals to strictly adhere to and respect the Constitution of Zimbabwe which was overwhelming approved by a referendum vote of May 2013.

On Friday this week, Zimbabwean President Robert Mugabe was reported by local media to have embarked on nationwide public rallies aimed at rousing support for the ruling ZANU-PF in the 2018 elections. The ZANU-PF party wants incumbent President, Mugabe 93, as its sole presidential candidate.

The Bishops’ pastoral letter is an attempt to prepare and steer the nation away from a repeat of the 2008 political and electoral crisis. Zimbabwe’s 2008 pre and post-election landscape was very volatile and characterised by widescale violence most of which was blamed on state institutions and agents.

As a way out of the 2008 crisis, the ZANU-PF and the two MDC political parties settled for a power-sharing Government of National Union (GNU) brokered by the then South African President, Thabo Mbeki in 2009.

With this pastoral letter, the Catholic Bishops want Zimbabweans to respect the Constitution and behave peacefully before, during and after the 2018 general elections.

“As we prepare for 2018, let us respect each other and even mirror in our words and actions the love of God, Father of us all.” The Bishops add, “We now have our own Constitution, a great achievement, and it says in one place, ‘The State and every person, including the juristic persons, and every institution and agency of government at every level, must promote national unity, peace and stability,’” the Bishops say.

All the Bishops signed the pastoral letter which was released Sunday by the Zimbabwe Catholic Bishops’ Conference (ZCBC).