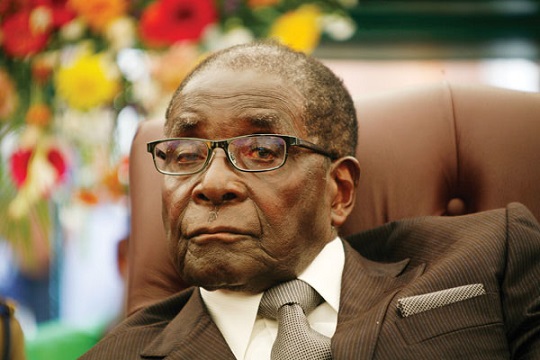 For most of his 37 years in power, Robert Mugabe had been the target of severe criticism from the country’s Catholic bishops. But his removal from power by the military earlier this month has allowed the bishops to strike a more conciliatory tone.

In a statement issued on Sunday, the Zimbabwe Catholic Bishops’ Conference said it has forgiven Mugabe for his “transgressions” in office.

“We thank the former president for the good work he did for Zimbabwe during the liberation struggle and as president for 37 years. We forgive him for any shortcomings during his long tenure of office. We wish the new incumbent every blessing and success,” the bishops said.

The end of the Mugabe regime was swift and unexpected.

The military acted after the president dismissed his vice-president, Emmerson Mnangagwa, which led the country to think Mugabe was preparing the way for his unpopular wife, Grace, to succeed him in office.

The move by the 93-year old leader was a step too far for the military: Mnangagwa had been a key ally in Mugabe’s administration and was a leader in the struggle against white-rule in the 1970s.

Maj. Gen. S.B. Moyo denied the detention of Mugabe on the evening of Nov. 14 had been a coup, claiming instead the military was removing “criminals” who had surrounded the president.

Despite this assertion, Mugabe was forced to resign, and Mnangagwa now sits in the presidential palace, at least until a general election scheduled for next year.

The bishops have called on Mnangagwa to form an all-inclusive government, and to help the transition to a functional democracy.

“Beyond this crisis, a sustainable normalization of Zimbabwe can only be achieved through a people-inclusive and participatory process in a democratic way. We encourage the governance of Zimbabwe in any transition that may be adopted to embrace all Zimbabweans in their diversity and their oneness. This is a Kairos moment where all Zimbabweans should have a voice in this transition,” the bishops’ statement read.

They said only a national transition can heal the wounds left by Mugabe’s nearly four decades in office.

Although the Catholic Church is a minority in the country – about 10 percent of the population – it has been one of the most respected independent voices in the struggle for human rights and the rule of law.

Ironically, one of the most famous Zimbabwean Catholics is Mugabe himself, although this fact has not spared him from the bishops’ criticism.

In 2007, for instance, the bishops called on the president to resign or face “open revolt” in their Easter message.

“As the suffering population becomes more insistent, generating more and more pressure through boycotts, strikes, demonstrations and uprisings, the state responds with ever harsher oppression through arrests, detentions, banning orders, beatings and torture,” the Zimbabwe Catholic Bishops’ Conference said at the time.

“Many people in Zimbabwe are angry, and their anger is now erupting into open revolt in one township after another,” they added.

The bishops then called for a new “people-driven constitution that will guide a democratic leadership chosen in free and fair elections.”

The recent developments in the Southern African country have again had the bishops calling for electoral reforms as the only way by which Zimbabwe can dig itself out of the economic morass it now finds itself.

Mugabe has left a country with an unemployment rate approaching 90 percent, and over 72 percent of the population living in chronic poverty.

Hyperinflation led to the collapse of the currency, which was abandoned in 2009. (Most people either use the U.S. dollar or South African rand.)

A land redistribution policy which gave white-owned farms to black Zimbabweans – most of whom were political allies of the ruling ZANU-PF party with little experience in farming – led to the collapse of the nation’s agricultural sector, despite the fact Zimbabwe was once known as the breadbasket of Africa.

Mnangagwa has already promised to fix Zimbabwe’s economy and “ensure a peaceful transition to the consolidation of our democracy.”

He has also insisted the endemic corruption which has plagued the country for decades must end, adding acts of corruption must lead to “swift justice.”

“The culture of government must change and change now,” Mnangagwa has said.

A general election had previously been scheduled to happen before the end of September 2018.

Mnangagwa said the election will take place as planned, and the bishops are pushing “for electoral reforms to restore confidence in the plebiscite.”

“The realization of free and fair elections in 2018 will make the outcome more acceptable internally and externally,” read their statement.

Despite the enthusiasm in the country since the ouster of Mugabe, there are concerns Mnangagwa is ill-suited to be the person guiding democratic reform in the country.

In the 1980s, he was suspected of being behind the campaign known as Gukurahundi – involving the massacre of 20,000 members of the minority Ndebele ethnic group in Matabeleland in order to destroy the power base of Mugabe’s main rival, Joshua Nkomo.

Nkomo was an Ndebele, while Mugabe and Mnangagwa are Shona, the majority ethnic group.

“Mnangagwa is one of the creators of that system of repression and control, which has enriched a small cabal at the top through a vast empire of corruption,” said Todd Moss, a former U.S. deputy assistant secretary of state for African affairs and currently senior fellow at the Center for Global Development.

“He may entice one or two opposition leaders to play a ceremonial role, but he is unlikely to cede any real influence,” he told The Herald, a Zimbabwean newspaper.

“This is the basis on which we have to work. The people are very enthusiastic here, very patient, and they hope for the better future,” Zalewski said.

“But the Church must teach them…must propose in which direction they have to go,” he said.