Workshop Toward Launch and Yearlong Celebration of SECAM Golden Jubilee Kicks Off in Kampala, Uganda 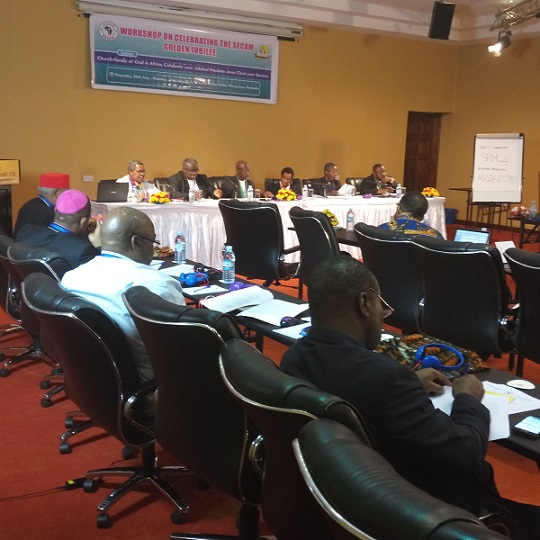 Workshop Toward Launch and Yearlong Celebration of SECAM Golden Jubilee Kicks Off in Kampala, Uganda

A workshop organized to prepare for the launch of the yearlong celebration of the existence of the Symposium of Episcopal Conferences of Africa and Madagascar (SECAM) kicked off Friday, July 29 in Kampala, Uganda with representatives from various Regional Bishops’ conferences and other continental institutions in attendance.

The workshop sessions, which were facilitated by SECAM’s Theological Committee (COMITHEOL) were preceded by a word of welcome from SECAM President, Archbishop Gabriel Mbilingi of Lubango, Angola who also acknowledged with appreciation the initiative of the Church leaders in Africa to speak with one voice through SECAM.

Pope Paul VI inaugurated SECAM in 1969 in Kampala, the first ever papal visit to Africa.

Various facilitators provided the context of the Golden Jubilee, explaining the objectives and the calendar of the yearlong celebration to be marked with prayer sessions and particular actions in the local churches in Africa.

“As Christians, we are all in the context of the Jubilee year, a call to return to our ancestral roots, in our case, a return to our baptismal promises, proclaiming the gospel in thanksgiving for who we are, remembering the progress we have made in the last 50 years, naming what we are grateful for,” Sr. Teresa Okure, a member of SECAM’s COMITHEOL told delegates during the workshop sessions, adding that the jubilee celebration would include repentance for the messes “we may have been in, and then renewed commitment to witness to Christ in Africa and Madagascar.”

“Since it is a celebration of SECAM, the Bishops in Africa need to take the lead in evaluating itself, in terms of why it was formed and the extent to which the purpose has (or has not) been achieved,” Sr. Okure clarified, drawing delegates toward providing suggestions for a Kampala Document as part of the yearlong celebration of the Golden Jubilee.

A primary activity during the Jubilee celebration will be monthly prayer intentions to be guided by particular scriptural texts, which could be enriched by local examples and related concrete activities to be identified by and implemented in the local churches on the continent.

For August 2018, the focus will be on Church communities, with a proposed meditation that focuses on the example of the first Christian communities and rooted in the celebration of Holy Eucharist. This intention will be guided by Acts 2:42-47.

There is no theme for July 2019, because it is the concluding month when all the Jubilee intentions will be reconvened and reflected upon. In this regard, each month lived is not left behind but instead brought together progressively toward the climax of the golden Jubilee celebrations in July 2019.

COMITHEOL facilitators encouraged local Churches to take particular initiatives to live the monthly intentions, exercising creativity for the good of the people of God on the continent in celebrating the Jubilee as inserted in the universal Church, on which each monthly intension is grounded.

Bishop Mathieu Madega Lebouakehan of Mouila, Gabon who is the first vice President of SECAM and COMITHEOL Chair reiterated the need to engage the clergy, religious, and especially the laity in the activities of SECAM Jubilee explaining that such engagement of all Church members is a sure move toward the promotion of the growth and progress of the Church in Africa.

“Unity and collegiality is significant so that dioceses, national and regional conferences strive to have common activities in living through the jubilee year,” Bishop Lebouakehan emphasized.

The yearlong Jubilee celebration will be launched Sunday, July 29 at the Sacred Heart Cathedral at Rubanga in Kampala, Uganda, under the theme: Church – family of God in Africa; Celebrate your jubilee! Proclaim Jesus Christ your Savior.