PRESS RELEASE NR. 2 FROM THE COMMUNICATIONS OFFICE OF SECAM
ON THE 17TH PLENARY ASSEMBLY OF SECAM IN ANGOLA

The Vice-President of Angola, Ing. Manuel Vicente, has called for closer collaboration and cooperation between the Church and State for the building of a more just and morally upright society.

Addressing the opening ceremony of the 17th Plenary Assembly of the Symposium of Episcopal Conferences of Africa and Madagascar (SECAM) yesterday in Luanda, Angola, the Vice-President stressed the need for the two bodies to condemn violence, the abuse of children, immorality and other vices in society and the family. ‘We live in world of complexities and ideologies so much so that what happens in one part of the world has direct or indirect effect on the family and society in general in other parts of it.’ He therefore hoped that the Church in Africa will continue to support the State in promoting moral values, human rights, mutual respect, democracy and good governance.

The Assembly was declared opened by the President of SECAM, Archbishop Gabriel Mbilingi of Lubango, Angola, who also gave a brief history of SECAM.

He celebrated Observer Status obtained by SECAM in the African Union (AU) as an opportunity for mutual enrichment of the two bodies. He hoped that with this there will be closer relations between SECAM and the various Governments in Africa through the AU. 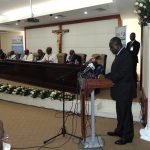 Vice- President of Angola, Ing. Vincente, delivering a message to the participants. 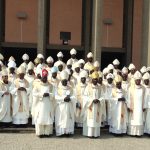 Photos of the Plenary Assembly. Some of the Bishop delegates. 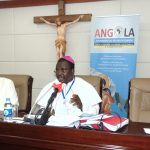 There were goodwill/solidarity messages from the Apostolic Nunciature in Angola; MISSIO, Germany; MISSIO, Aachen; CAFOD; Catholic Relief Services; Catholic Biblical Federation and Caritas Internationalis. The rest are: The Federation of Asian Bishop Conferences; Council of Episcopal Conferences of Europe; Family Life Federation in Africa; and the Association of Africa Catholic Women Organisations. (see their messages attached).

The opening ceremony was preceded by the celebration of the Eucharist at the Holy Family Parish in Luanda.

The bishops of Africa through presentations and workshops on various topics on the theme will focus on a number of issues pertaining to the African family, with particular reference the two recent Synod’s on the Family and the Post Synodal Apostolic Exhortation: Amoris Laetitia.

This morning (July 20, 2016), Most Rev. Emmanuel Adetoyese Badejo, Bishop of Oyo and President of the Episcopal Committee for Social Communications for Africa and Madagascar (CEPACS) in a presentation on the Influence Of Modern Media And New Ideologies On The Family In Africa Today, emphasised that the Church must absolutely be more present in the digital media world in a deliberate and informed manner and also endeavour to engage media professionals and practitioners to pay more attention to Family values in their work.
The bishop called on the Church to celebrate and “enrich” existing marriages and families at every opportunity and speak more openly and directly about the benefits of chastity before and within marriage. To this end, he proposed the holding of an Annual Continental Day of the Family by the Church in Africa in collaboration with Pro-Life and Pro-Family organizations and other groups irrespective of religious and denominational differences which favour and nurture the family. ‘The Church must eloquently denounce harmful new ideologies as essentially atheistic, seeking to disestablish the concept of God and religion from public discourse and consciousness.’ He concluded.

The Assembly will conclude with the adoption of Resolutions, Recommendations, a Final Message and a Communique.

The Plenary Assembly is taking place in Luanda, Angola from, from July 18 to 25, 2016. This is the first time that SECAM is holding its Plenary Assembly in Angola since the Symposium was founded in Kampala, Uganda in July 1969.

The last Plenary Assembly was held in July 2013 in Kinshasa, Democratic Republic of Congo under the theme: The Church in Africa at the service of Reconciliation, Justice and Peace.

Prepared by:
Benedict B. Assorow
Director of Communications, SECAM