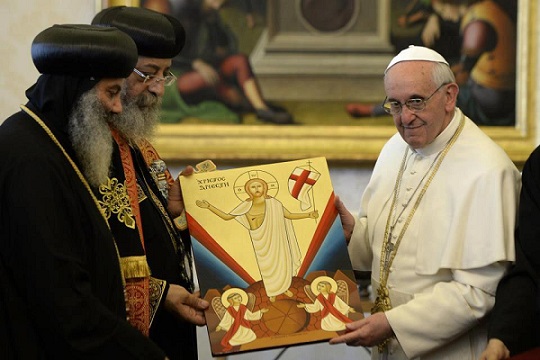 Pope Francis will meet with the leader of one of the world’s leading Sunni Muslim institutions, the head of the Coptic Orthodox Church and representatives of the Catholic Church on a two-day trip to Cairo.

The pope is scheduled to arrive in Cairo April 28 for courtesy visits with political and religious leaders and deliver a speech, along with the grand imam of al-Azhar University, to an international conference on peace. He will celebrate Mass for the small Catholic community in Cairo the next day and meet with bishops, clergy, religious and seminarians before returning to Rome April 29.

In mid-March, the Vatican confirmed the pope would make the trip following an invitation from President Abdel-Fattah el-Sissi, the Catholic bishops in Egypt, Coptic Orthodox Pope Tawadros II and Sheik Ahmad el-Tayeb, grand imam of al-Azhar.

It will be the pope’s 18th trip abroad in his four years as pope and the seventh time he visits a Muslim-majority nation. He will be the second pope to visit Egypt, after St. John Paul II went to Cairo and Mount Sinai in 2000.

The Catholic community in Egypt numbers about 272,000, less than 0.5 percent of the population, which is 90 percent Sunni Muslim.

In 1998, Catholic-Muslim dialogue was initiated between Vatican experts and Muslim scholars of Cairo’s al-Azhar University, the main center for Islamic learning for the more than 1 billion Sunni Muslims worldwide. The trip will come amid increasingly closer relations between the Vatican and al-Azhar, which is considered the most authoritative theological-academic institution of Sunni Islam. The pope has also said he sees the importance of strengthening cooperation between Catholics and Coptic Orthodox Christians in the face of so many threats to human life and creation.

Here is the pope’s schedule as released by the Vatican. Times listed are local, with Eastern Daylight Time in parentheses.

— 2 p.m. (8 a.m.), Arrival at Cairo airport. Official welcoming ceremony at the Heliopolis presidential palace. Courtesy visits with el-Sissi and Sheik el-Tayeb. Speeches by the grand imam and the pope to participants in an international conference on peace.

Egyptian police on Sunday arrested 13 people who were planning attacks against Christians and public institutions in the country.

The April 16 arrests take on greater importance as Pope Francis prepares to visit Egypt at the end of the month.

According to Aid to the Church in Need, the arrests of these terrorists reveal “how these extremist groups continue to target the Christian community after the double attack against two churches in Tanta and Alexandria on Palm Sunday.”

The attacks of April 9 which caused the death of 44 Christians and injured more than 100, were claimed by the Islamic State, which led the authorities to implement security measures outside churches.

The attacks made the government decree a state of emergency for three months, to which was joined the decision by some Christians to celebrate discretely Easter Sunday.

Egypt has a population of 92 million people who are mostly Muslim. Christians are about 10 percent of the population, and have been victims of a number of recent attacks and assaults.