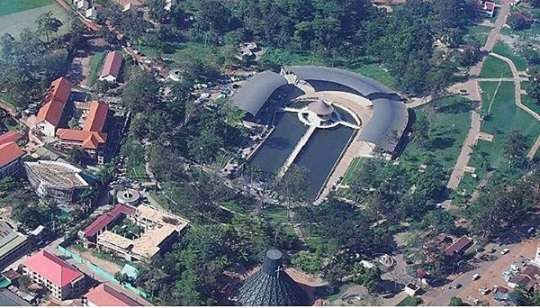 President Museveni yesterday pledged funding to upgrade the Anglican martyrs shrine at Namugongo to a sparkling status to match the Catholic one in the same vicinity.

The President made the pledge while addressing thousands of pilgrims during the Uganda Martyrs Day celebrations at the Anglican Shrine in respect to the 23 Anglican converts who were executed in 1885 by the then king of Buganda, Kabaka Mwanga.

“We are going to build this place. We have done a lot at the museum and we will continue. Here, the place is slippery and people may fall. We have to build here as we did there at your friends’ (Catholics) place,” Mr Museveni told the congregation.

He said his commitment towards upgrading the Anglican site has been motivated by the way the Anglicans are beginning to embrace pilgrimage at their shrine.

“For a long time, the Church of Uganda has not embraced this day. You had slept but now you are waking up. When we declared June 3 as a public holiday,…I would go to the Catholics [Catholics’ shrine] and it would be full but there would be a handful of pilgrims here. Since I have come here and enjoyed, I will give more because for the Catholics, the place is now good,” Mr Museveni said.

Martyrs Day was declared a public holiday by Parliament under the Public Holidays Act 1965.

Reacting to reports in some media, which indicated the Church House under Church of Uganda was facing auction over loans, President Museveni pledged to clear the debt to save the multi-floor building on Kampala Road.

He did not specify the amount he will contribute, but said he will meet with the Church of Uganda leadership to find a solution.

The Church House was started during the reign of Archbishop Luke Orombi who headed Church of Uganda from January 2004 to December 2012 when he retired.

“The issue of the Church House debt which I read in the newspapers today; we are going to see that it is not taken. God has put me here through you, we suffered with that work with Orombi, and it will not be easy for business people to take it,” Mr Museveni said.

However, Church of Uganda Archbishop Stanley Ntagali said claims that the Church House is about to be taken away by creditors are lies.

“What you read in the papers are lies. On June 14, Equity Bank will move from Katwe to this house. Your Excellence, we will invite you to come and open this building officially. Let us forgive New Vision [newspaper] for the propaganda,” Archbishop Ntagali said.

He appealed to Christians to contribute towards completion of the museum and the Anglican shrine complex. President Museveni surprised the congregation when he arrived during the service and shook hands with his political rival and four-time presidential contender, Dr Kizza Besigye.

Since their fallout in 2000, the duo had not shaken hands in public until Pope Francis’ visit at Catholic Martyrs Shrine on November 28, 2015.

While preaching to the pilgrims, Bishop David Grant Williams of Basingstoke, UK, asked the Christians to emulate the Uganda martyrs who did not relent on their faith in the face of death.

“On this day, 45 young men refused to renounce Jesus Christ. As pilgrims and visitors, are we ready to say the same that until the last breath we cannot renounce Jesus? We all came here because we need to rediscover the anchor of the Christian church,” he said. Bishop Williams, 57, born in Reading, UK, spent his childhood and youth time in Uganda.

He attended Nakasero Primary School in Kampala before moving to Kigezi High School when his father was transferred from Mulago hospital to then Kigezi District as a medical officer.