The Church in Zambia is on Mission: Lusaka Archbishop 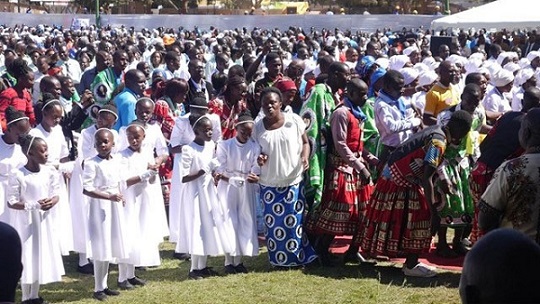 The Church in Zambia is on Mission: Lusaka Archbishop

Archbishop Telesphore-George Mpundu, the Metropolitan Archbishop of Lusaka and President of the Zambia Conference of Catholic Bishops (ZCCB), over the weekend, congratulated the Zambian Church on the occasion marking the celebration of the 125th Anniversary of the arrival of Catholic Christianity in Zambia.

Addressing a huge outdoor Mass in the Zambian capital of Lusaka held at the city’s Showgrounds, Archbishop Mpundu noted that after 125 years of her existence, the Zambian Catholic Church is no longer missionary but has grown to be a Church on mission. As such, the Archbishop encouraged the vibrant, mature and dynamic Church to soldier on in her faith, especially by sharing it with others.

“Share your faith with other people, members of your extended families, and with other Zambians. Faith that is not shared remains small and is infantile. Faith shared is multiplied,” stated the Archbishop.

Reflecting further on the 125 years existence of the Catholic Church in Zambia, Archbishop Mpundu paid glowing tribute to the many roles played by women in the Zambian Catholic Church.

Women, the Archbishop said, are “the heartbeat of our parishes, without them, the Church would be dead,” Archbishop Mpundu said. He implored particularly the Catholic women professionals, in the country, to take an even more active role in the affairs of the Church; to utilise their talents and to add value to the Church of Zambia.

Archbishop Julio Murat, the Apostolic Nuncio to Zambia echoing the homily of the Archbishop of Lusaka, encouraged the Zambian Church to send missionaries to the Western world. The Holy Father’s representative in Zambia then imparted, to the people of Zambia, the Holy Father Pope Francis’ Apostolic blessing.

“During the Jubilee year, we have to thank God, ask Him for forgiveness and pledge to do better with God. Since the Church in Zambia has grown, it is now time to send missionaries to the world,” Archbishop Julio Murat said.

The year 1891 is associated with the arrival of the Missionaries of Africa (White Fathers) in Zambia when they successfully established a mission in the northern part of the country.

The Fr. Stanislaus Lubungo, the current Superior General of the ‘White Fathers’ also attended the closing celebrations. He paid tribute to every person who had contributed to the growth of the Church in Zambia. He challenged the Zambian Church not to lose focus in her practice of authentic faith.

“I believe that today should also be about keeping alive the memory of our ancestors in the faith by imitating them. But we will not do that simply through symposiums, workshops or even grandiose liturgies….. if we do not continue to look for ways in which the flame of the passion of our ancestors in the faith can empower us to lead the kind of committed lives they led -at the service of the needy. It is in that way that our Catholic faith will become a beacon of hope as we strive to reach out to those that society casts to the peripheries,” said Fr. Lubungo.

The country’s Vice President; government, civil and traditional leaders attended the event. Many Christians from other denominations together with their leaders participated in the celebrations.   Also present at the colourful Mass were several Catholic Bishops, the faithful from all corners of Zambia, priests and the religious.