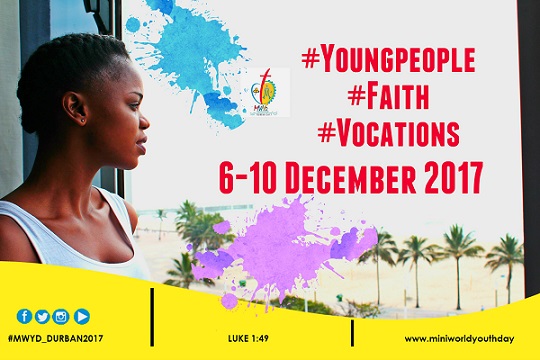 The five-day Mini World Youth Day (MWYD) 2017, which is bringing together young people from Botswana, Lesotho, South Africa and Swaziland, officially started Wednesday, December 6 and will run until Sunday, December 10.

On the 3rd December Young Catholics started flocking to Durban for MWYD.

Firstly, the young people started in the Parishes where they were hosted by different families in the Metro of Durban.

The vibe has been great seeing this multitude of young people together from different walks of life, united with heart and mind to appreciate the might deeds God has done in their own life.

The mood of young people here is that they would like to see this organisation continuing, and together with their bishops and the organising stakeholders of the Catholic and the government representatives feel that there is nothing holding them back to campaign for the World Youth Day after the one in Panama in 2019.

The Mini World youth Day of this year is attended by all Southern Africa Catholic Bishops, and it is ecumenical in nature as it graced by other representatives from different denominations who have been working closer with the Catholic Church.

The event of Mini World Youth Day success of hosting about 5000 young people from different cultures and countries under the same roof, with a highest quality of organisation, as one of the best hosting places in the world have managed to instil confidence to many stakeholders for support. It has already instilled courage and confidence to many young people to participate in the event. The event is also graced by the attendance of other countries of Southern Africa, such as Zimbabwe, Mozambique, Botswana and Swaziland.

For a long time South Africa was torn by racial divisions imposed by white minority, but after the first democratic elections in 1994 South Africa saw the new dawn of hope, whereby since there a new rainbow nation has been slowly cooked in the rainbow pot. The signs of racial division between the white and the black people are fading away as the new generation of young people see no need for this division. This class of young people call themselves born free generation.