For New Catholic Radio in Kenya, ‘evangelization’ Covers a Lot of Ground 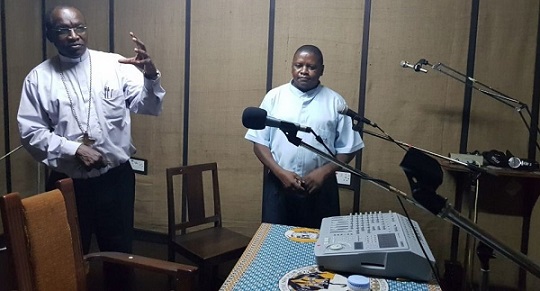 For New Catholic Radio in Kenya, ‘evangelization’ Covers a Lot of Ground

In a hyper-religious milieu such as Kenya, where preachers, holy men and sages are rock stars, and where spiritual programming can give “Dancing with the Stars” a run for its money in terms of ratings appeal, it’s not as if the airwaves in a place like Mombasa were exactly barren before Radio Tumaini came along.

Sponsored by the Catholic Archdiocese of Mombasa, the one-year-old offering is up against the likes of “Sifa,” the popular radio network of the mushrooming Evangelical churches in the city, Kenya’s second largest and the capital of its eastern coastal region. Sifa offers a natural platform for the pumped-up, high-octane music, praise and worship for which Evangelicals and Pentecostals are known.

In that crowded marketplace, Archbishop Martin Kivuva Musonde launched Radio Tumaini, which is Swahili for “hope” one year ago with a broader ambition: His version of Catholic radio wasn’t primarily going to teach religion – it was going to change the world.

“When we can help people live in peace and harmony, they don’t have to become Catholic,” said Kivuva on Wednesday while leading Crux reporters on a tour of the outdated radio station hosted by a Mombasa parish that he aims to convert into a new state-of-the-art facility.

“Our aim is to promote the values we embody as a church, our social teaching,” Kivuva said, without always making a point of saying, ‘This is Catholic!’ If people actually were to live that teaching, even without knowing it comes from the Church, that would be a great outcome.”

Father Raphael Kanga, one of two Mombasa priests Kivuva has put in charge of the radio project, echoed the point.

“The point of the radio is not to say to everyone, ‘Become Catholics!’” Kanga told Crux on Wednesday. Instead, he said, it’s about “transforming society, showing people that this is how life is supposed to be lived.”

Kanga said that not long ago, the radio station hosted a physical get-together for its listeners and fans, and he was surprised to find an Evangelical pastor there: “I like you guys, because you don’t discriminate, even with the music,” Kanga quoted the pastor as saying.

When asked what the pastor meant, Kanga laughed: “Not all of our songs are about Mother Mary,” he said.

Kivuva is no naïf, knowing full well there are circles where such an understanding of the mission of a Catholic radio station could be controversial. In the perennial tension between explicit evangelization and promoting social change, some Catholic media moguls clearly emphasize the former.

Yet Kivuva is undeterred, telling a story that he believes illustrates the point. During Kenya’s most recent election cycle, he said, the country’s Catholic bishops took lead in assembling an inter-religious coalition of Christians, Muslims and others pleading for a vote and asking politicians to conduct themselves with integrity. That was a high priority for the bishops, he said, against the backdrop of widespread violence after Kenya’s last presidential race, as well as perceptions of routine corruption and vote-buying.

That message, Kivuva said, was expressed in common statements, but it was really the radio outlets of the different faiths that brought it to the people and made it stick.

“When August 8 came,” he said, referring to election day, “the voting was peaceful, it was more or less orderly, and we got through it without any of the typical crises we’ve seen. Most people say that was courtesy of the Catholic Church, but the radio was also very important.”

Kivuva is a native of Mombasa, and the idea for the radio station dates to the early 2000s when he was serving as a priest in the archdiocese and running its communications operation. He basically had it set up before he became the bishop of Machakos, where he would spend 11 years. In the meantime, operations at the Mombasa Catholic radio station basically lapsed, and relaunching it has been on his to-do list since he returned.

It’s part of a bigger vision Kivuva has for Catholic communications, under the banner of “Lwanga Communications,” a reference to one of the martyrs of nearby Kenya. Among other things, the approach features some forays into the movie business.

Recently, the second cleric involved in his media push, Father Bosco M. Soup, directed a dramatic film called Chozi, intended to get across the basics of the Catholic understanding of marriage without being preachy about it. Basically, it tells the story of a couple where the man dumps his fiancé to run off with another woman, then has a serious accident. He’s been abandoned by his new lover, but the faithful fiancé comes to his aid, and he eventually ends up proposing marriage from his hospital bed.

“It’s a common story,” Kivuva said. “In marriage situations in Kenya, the woman often ends up on the short end, and we wanted to do something to make people think about that.”

Currently, Radio Tumaini is operating only in a rural area of the archdiocese called Taita Taveta country – mostly, as it turns out, because that’s where they could navigate the complex bureaucratic obstacle course in Kenya to be assigned a frequency first. Now, however, officials believe they’ve gotten the clearance for a frequency in Mombasa itself, and they only need to complete the paperwork.

In terms of programming, Radio Tumaini is a mix of fairly conventional religious fare – morning prayers and Bible reflections, live Sunday Mass, selections of sacred music, and so on – along with practical fare such as “Health Matters,” a show explaining how to cope with diabetes, high blood pressure, and so on. It even does shows on local concerns such as “human/wildlife conflict” – for instance, if elephants on a preserve wander off onto local farmlands, and the farmers want something done about it.

Virtually all content is broadcast in Swahili, which is the language up and down Kenya most people tend to share.

Radio Tumaini also carries content from abroad, including some programming from Vatican Radio. Despite a cycle of cost-cutting in the Vatican that’s already resulted in some reductions in services and may produce more, Kivuva insisted that the pope’s radio station has a value.

“It’s about helping us be a Catholic church,” he said. “When a poor man in an isolated village tunes in and hears the pope speaking, that’s  a big thing … to get this voice from elsewhere, it makes us feel more universal, and it gives us a perspective we otherwise wouldn’t have.”

Kanga said the idea is also to branch out into more socially relevant content, such as putting together inter-religious shows featuring Christians, Muslims and followers of other traditions together, as an antidote to the perpetual risk of sectarian, ethnic and political conflict.

“Mombasa is a hot spot for radicalization,” Kanga said. “It needs guidance from people who have the right approach.”

Despite planning to move aggressively into social media and an online news portal, Kivuva said radio remains indispensable if you want to reach the ordinary person in the street.

“Much of our archdiocese is rural,” he said. “Technology takes time to penetrate the country. This is the best way to reach the entire nation.”

Kivuva is a keenly media-savvy sort, and he also sees plenty of other opportunities to leverage the church’s resources.

“We have all this Catholic music galore, from choir competitions and so on, and most of it is high-quality stuff,” he said. “Now we can produce and distribute it, because often our messages are carried by our music.”

Kivuva is currently trying to raise money to upgrade the radio service’s Mombasa offices, expanding it to include not just day-to-day operations but quarters for quests and space for interns and volunteers. He also envisions a media training program, designed to help aspiring young broadcasters and journalists get their start.

All this, Kanga said, is rooted in a basic instinct felt not just by Kivuva, but many African Catholics.

“The voice of the church in Kenya, in Africa, in the whole world, needs to be heard,” he said. “It’s a chance to help in transforming society, evangelization, in helping people understand the plan God has for their life … our voice has to go out.”