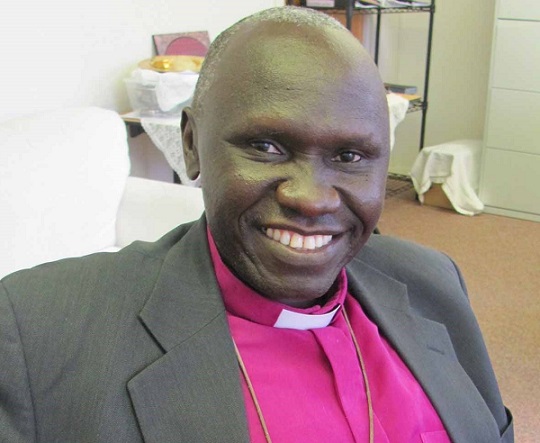 The Archbishop of Canterbury, Justin Welby has appointed the bishop of Kajo-Keji Diocese in South Sudan, Rt. Rev. Anthony Poggo as his new adviser for Anglican Communion affairs.

“I am absolutely delighted that Bishop Anthony is joining the team at Lambeth,” Welby told Episcopal News Service (ENS).

“He brings the experience of his ministry in one of the most challenging provinces in the Anglican Communion where he has faithfully served the church as a pastor and teacher,” he added.

Throughout his ministry, Poggo has reportedly been engaged with the profound issues, which many parts of the Communion face, where famine, war, and violent ethnic tensions destabilise society and leave whole communities living in poverty.

“He is well known and respected throughout the Communion and I am most grateful to Archbishop Daniel Deng Bul for releasing Bishop Anthony as a gift to the wider church. His appointment provides a necessary voice and perspective from the global south in the team at Lambeth. I look forward to working with Bishop Anthony to strengthen our relationships around the Provinces at a significant time in the life of the Communion,” Welby stressed.

On 4 October, according to ENS, Deng Bul joined Poggo in the Diocese of Kajo-Keji where the news of the appointment was given.

His appointment comes following an extensive selection process which attracted applications from across the Anglican Communion.

Meanwhile Poggo said he was delighted to accept Welby’s invitation and appointment to join the team at Lambeth Palace.

“I look forward to working together with colleagues at Lambeth to support the Archbishop of Canterbury in his ministry,” he told ENS.

He further added, “I appreciate the support from Archbishop Daniel Deng Bul in releasing me from our current role in Kajo-Keji so as to make a contribution in the global Anglican Communion. Jane, Joy and I are excited at this next phase of our ministry.”

Before his ordination in 1995, Bishop Poggo worked with Scripture Union. From 2002, however, he served with ACROSS, becoming its executive director in 2004. He was elected bishop of the Diocese of Kajo-Keji in the Episcopal Church of South Sudan in 2007.

In 2012, Poggo was awarded an honorary doctorate for his role in the mobilizing the church in service of the community. He holds a Master of Arts in biblical studies from Nairobi International School of Theology, now called International Leadership University, and a Master of Business Administration from Oxford Brookes University.