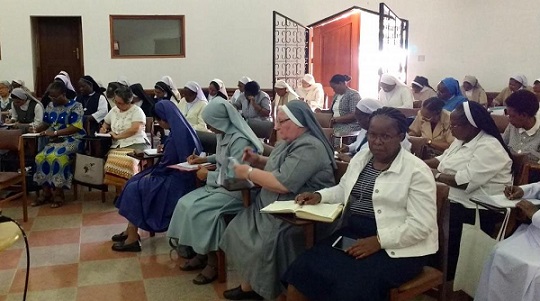 In October, when nearly 150 sisters came together in Nairobi from across Africa for the Hilton Foundation and African Sisters Education Collaborative Convening, most of the time was devoted to exploring the future of sisters and their ministries. What will the future of sisterhood look like in Africa? How will sisters cooperate with each other and other institutions? How will they solve problems like hunger or the lack of education or clean water?

But before looking forward to the future, it is also essential to look back at the stories that shaped each sister on her journey to where she is today. By capturing and sharing these stories, it helps sisters understand where they’ve been, to have a clearer picture of where they are going.

So just a few hours before the convening kicked off, Global Sisters Report led one of our writing workshops for sisters who are in leadership positions or are superiors general of their congregations.

‘I am doing what I am supposed to do’

A challenge I overcame as a sister was when I was asked to start a program for street children, to combine my efforts with a priest and get it moving. I felt afraid, I was so troubled to imagine myself in the streets, speaking, walking, laughing and being surrounded by many children who lived there. Even though I knew well that I was called to do this and it was a “noble” activity, well related to my vocation, I was still afraid.

When I started, it was at times frustrating, but slowly, slowly, with God’s help, it started resonating with my system. One day, I found a girl who was very sick with wounds all over her body in the streets. I invited passersby to assist me to lift her. None accepted. I lifted her, made her sit, and talked to her. I got a lot of pus, which was oozing from her body, on my dress. She was smelly and very dirty. A passerby wanted to know what I was doing. I told him, “I am doing what I am supposed to do and happy to do for God’s kingdom.”

She was later admitted to the hospital, I went the following day to shave her hair, which was like a piece of wood after so many years without bathing.

We became friends. I invited other street children to visit her in the hospital. I was happy to walk in and out of the hospital with them. She recovered and we searched for her family.

I really overcame the challenge of being with the children in the streets, the challenge of fearing being seen together with them. I was happy about this apostolate and if I had another chance, I would be so happy to do it.

‘A dilemma in decision making’

Four years ago, there was a very threatening situation on Zanzibar Island, where our sisters serve. There are three communities with 11 sisters. On Zanzibar Island, 98 percent of the population is Muslim. Among them, there is a very small, anonymous and fanatic group that vowed to persecute Christians to the cost of their lives.

In 2013, the lives of Christians were at stake as the fanatical fundamentalist group killed one of the priests with a shower of bullets, leaving him dead with a shattered body at the entrance of the parish compound, just as he was going to say Mass early on a Sunday morning. A few months later, as another priest was coming out of a cyber café, he had acid poured on him that left his face burnt beyond recognition. In the same period, a parish church next to the convent of our sisters was burnt. Meanwhile, at that same time, a threatening rumor was going around all over the island that this particular fanatic group was longing to chop off the head of a Catholic nun.

This created in me a great anxiety as a leader, and it left the General Leadership Team of my congregation paralyzed and wondering what should be done to rescue the sisters from that dangerous situation.

Every day, I would call the sisters in turn just to know if they were safe. Amazingly, the sisters were firm and determined to remain there, with the Christians that were camping with them in their convents and parish grounds.

Actually, the sisters [in Zanzibar] made the decision; they encouraged us to continue praying for them and that is what we did. After six months, the situation gradually started becoming better. Thanks be to God that now there is a relative peace among the people.

‘Many others are coming after you who will help’

Here comes Margret Joshua, a young slim lady but with a seemingly urgent need. She looks 17 but is hardly able to carry herself quickly across the busy Karen Ngong Road. She is pregnant and sickly. All of a sudden, Margret uses her thin, feeble hand to gesture at me. I, on my part, am hurrying to the nearby church for the first Mass.

I first of all hesitate to answer her call but, on second thought, I asked, “May I be of help to you?”

It surprised her, because many Christians flocking to church had neglected her gestures, taking her for one of the serial beggars who stood by the roadside. She forcefully said, “Madam, help, I am hungry, I am sick, I am all badly off.”

Inside me, a strong voice was conflicted. “If you help this problematic youth, you’ll be late for the service. Many others are coming after you that will help. Go, go.” When another small, faint voice said, “Please stay, listen, and help this small girl.”

So, I yielded to the second voice, I went to Margret, listened, and loved. It was an appalling situation. She was bleeding. There she was, a fellow woman in ardent need of direction to any nearby clinic or hospital to understand what the matter was. She told me a little of her story.

“I am running away from my monster husband who beat me all night and told me to leave his home for he had no money to look after a fool of my caliber.”

I was awestruck as I led her to the hospital, where the nurses approached hurriedly after seeing me, and took care of us.

On examination, the doctor said she had to be admitted, and I said it was OK, because we had to save two lives. Meanwhile, I was blank about how to pay the bill, but I trusted. In the meantime, I told them Margret Joshua was my relative. When they gave me the bill, I took it to my community. The sisters, after a long and serious discussion of not having enough money to pay for uncalled for bills and uncalled for charity, accepted to pay the bill.

Margret is now a community friend. She has a healthy, kicking boy of 7 months. She visits our convent frequently for food and other family needs when the need arises. I have met her husband and counseled him and now he cares for and loves the baby boy dearly. They now both attend Sunday services and we are mediating them as a community to start instructing both of them in matrimony. They are eager to receive the sacrament.

I was first sent to explore the possibilities of opening a new mission in a very remote place [in Kenya], which had no known Christian presence. I went to a religious community that offered me a very warm welcome and hospitality. The following day, I met a visitor to the community and we began to interact with each other. When this visitor came to know the purpose of my visit, he was so happy and promised to take me to a remote village where people were very poor. Moreover, he told me that there is a small Christian presence in that area.