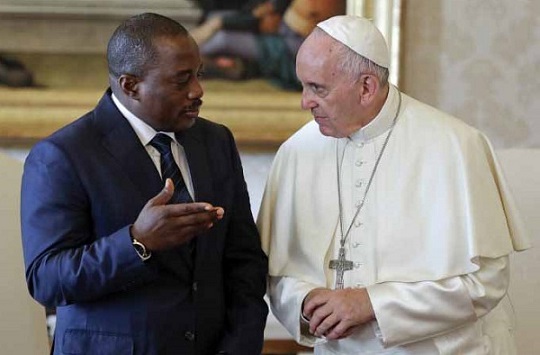 Going against protocol, the Pope waited in his library for President Joseph Kabila

Pope Francis has met with Congolese President Joseph Kabila, with the Vatican insisting that Congo’s government use respectful dialogue to end violent clashes with opposition forces over delayed elections.

The audience on Monday was a brief 20 minutes, with interpreters. The Pope didn’t greet Kabila in the reception room where, according to Vatican protocol, Francis would normally greet a visiting head of state. Rather, the Pontiff waited for Kabila in his library.

Clashes have erupted between security forces and demonstrators after the Democratic Republic of Congo’s electoral commission said November’s presidential vote wouldn’t be possible, and a court determined Kabila could stay in power until another election is organised.

The Vatican said the Pope and Vatican foreign minister insisted on dialogue among politicians, civil and religious authorities to ensure peace and the common good.