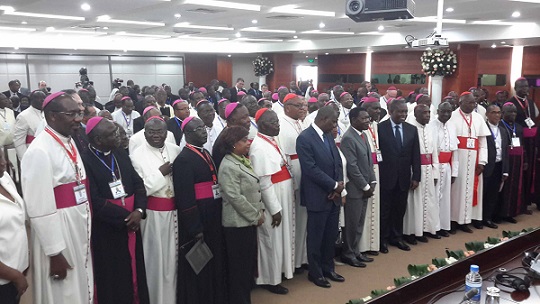 Some of the Catholic funding organizations that have over the years partnered with the Catholic Church in Africa to implement programs have pledged to continue this partnership despite the economic hardships they are experiencing.

Representatives from the organizations confirmed continued partnerships while addressing delegates and participants in Luanda, Angola, at the official opening of the weeklong Plenary Assembly of Bishops in Africa under the Symposium of Episcopal Conferences of Africa and Madagascar (SECAM).

Despite the Brexit, the possible resultant financial challenges, and particularly the impact on the African trade, the representative of the Catholic Agency For Overseas Development (CAFOD), assured the African Bishops of continued partnership.

“Whatever the scenario, please be assured that the bishops of England and Wales and its agency CAFOD is committed to continue supporting the Church in Africa and will do so regardless of stormy horizons,” CAFOD’s Chris Bain said Tuesday in his good will message to the African Bishops gathering in Luanda, Angola.

Referring to a Global Fund review on organizations’ performance in combating the HIV/AIDS pandemic during its early days, Sean Callaham of the Catholic Relief Services (CRS) noted that the Catholic Church “was so far superior to other organizations.”

“There were many factors, but the principal factor was trust,” Callaham said and added, “The interventions promoted by the Church respected human dignity, the family, and the sacredness of human life, and it ensured that the family unit was maintained by insuring parents lived to care for their children.”

He looked forward to the discussions of the African Bishop delegates on the theme of the family in Africa in view of responding “to the challenges ahead through communion/solidarity, inspiration and courage, and by responding to the opportunities that the future holds.”

Markus Buker of Misereor, the German Bishops’ funding agency, confirmed his organization’s keen interest on the issue of family and the plan to roll out projects in this regard.

Klaus Kramer of Missio Aachen revealed that in the last three years, his organization has supported the Church in Africa “with more than 34million Euros and we will continue to do so.”

Meanwhile, Angola’s Vice-President, Manuel Vicente, who was the guest of honor at the official opening of the Bishops’ Plenary Assembly acknowledged the role of the Church in the building of a just society and advocated for continued collaboration and cooperation with governments on the continent.

He particularly underlined the need for joint efforts in condemning violence, child abuse, immorality, among other vices in society and the family. He also lauded the African Bishops for having obtained the Observer Status with the African Union (AU) through its umbrella body, SECAM.

‘We live in world of complexities and ideologies so much so that what happens in one part of the world has direct or indirect effect on the family and society in general in other parts of it,’ Angola’s Vice-President said.

The Bishop delegates will elect SECAM officials on Saturday and conclude the 17th Plenary Assembly with a common message to the people of God on the continent and the celebration of the Eucharist, open to the public, on Sunday, July 24.