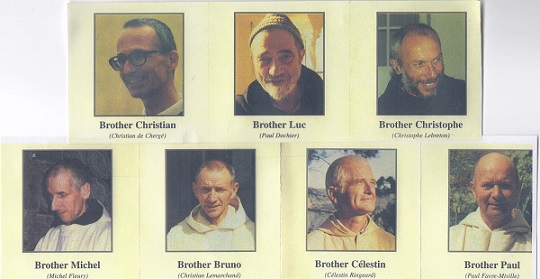 Pope Francis has recognized the martyrdom of a bishop, seven Trappist monks and 11 other religious men and women killed by extremists in Algeria in the 1990s.

At a meeting Jan. 26 with Cardinal Angelo Amato, prefect of the Congregation for Saints’ Causes, Pope Francis signed the decree for the causes of Bishop Pierre Lucien Claverie of Oran, Algeria, and 18 companions, paving the way for their beatification.

The 19 men and women died between 1993 and 1996, while Algeria was locked in a 10-year-long armed conflict between government forces and extremist Islamic rebel groups; the conflict left tens of thousands of people dead.

Bishop Claverie and his driver were killed by a remote-controlled bomb left by the bishop’s residence, and the seven Trappist monks, who had been kidnapped from the monastery of Tibhirine, were beheaded by a group of Islamic terrorists trained by the al-Qaida network. The monks’ story was treated in the film “Of Gods and Men,” which won the grand prize at its premiere at the Cannes Film Festival in 2010.

Trappist Father Thomas Georgeon, postulator of the cause, told the Italian bishops’ radio station Jan. 27 that a date for the beatification ceremony had not yet been set, but he hoped the Mass would be celebrated in Oran.

Pope Francis also recognized the martyrdom of Veronica Antal, a Romanian lay member of the Secular Franciscan Order and the Militia Immaculatae, which was founded by St. Maximilian Kolbe. She died in 1958 at the age of 22 after an assailant stabbed her dozens of times in a corn field for refusing his sexual advances.

Clearing the way for her canonization, the pope also recognized a miracle attributed to Blessed Nazaria Ignacia March Mesa, a Spanish religious, who was born in 1889 and founded the Missionary Crusaders of the Church.

He also recognized miracles attributed to three other religious women, paving the way for their beatification:

— Venerable Elisabeth Eppinger, a French religious who founded the Congregation of the Sisters of the Divine Redeemer; she died in 1867.

— Venerable Clelia Merloni, the Italian founder of the Apostles of the Sacred Heart of Jesus, who died in 1930.

— Venerable Maria Gargani, the Italian founder of the Sisters Apostles of the Sacred Heart. She was also very active with Catholic Action and was a close friend who exchanged extensive correspondence with St. Padre Pio. She died in 1973.

In causes just beginning their way toward sainthood, the pope signed decrees recognizing the heroic virtues of Italian Father Ambrosio Grittani, founder of the Oblates of St. Benedict Joseph Labre, who died in 1951, and Anna-Maria Maddalena Delbrel, a lay French woman, who died in 1964.