“Our prayers have been answered!”: Local Christians Rejoice over Unexpected Meeting between President and Leader of Opposition in Kenya 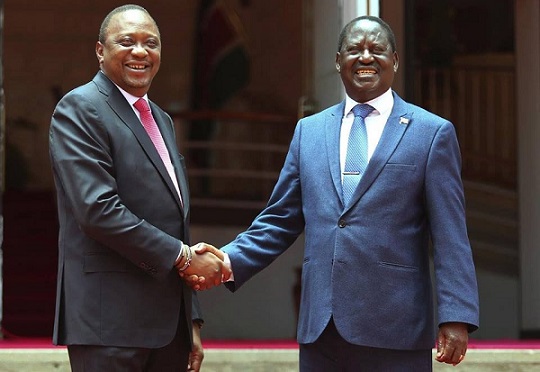 “Our prayers have been answered!”: Local Christians Rejoice over Unexpected Meeting between President and Leader of Opposition in Kenya

“The meeting between President Uhuru and the leader of National Super Alliance (NASA), Raila Odinga, comes in answer to our prayers. Catholics and other Christians have prayed with faith for peace in our country. Not by chance this is happening during the season of Lent; I believe that President Uhuru and Raila can be symbolic figures of a new healing for our nation”, Fides learned from Mercy Lanya, a Catholic lay woman belonging to Assumption of Mary parish in Umoja, Nairobi.

Her reaction was echoed by Eveline Shitabule, from All Holy Angels parish Lutonyi, diocese of Kakamega western Kenya, who told Fides: “This is the most recent miracle that has happened in Kenya! We’ve been praying for peace in our country and God does answer prayers.”

On March 9, the President of Kenya Uhuru Kenyatta held in Nairobi a surprise meeting with his political rival, Raila Odinga leader of the National Super Alliance (NASA). The two leaders in a joint address to the nation promised to work together to bring healing and reconciliation among Kenyans.

This is an important turning point after the contested elections in 2017, which were repeated in October after the Supreme Court declared void the vote held in August. In both votes Kenyatta was proclaimed the winner.

In a joint address President Kenyatta and the Opposition leader said they had accepted the programme to “build a strong and united Kenya”.

“I am happy with the gesture and there is certainly going to be a reasonable degree of peace and reconciliation among the followers of the two leaders. It is a fact that each of them has a huge following, a sizeable constituency that each of them commands. Their meeting and promise to work together has the potentiality of contributing to the healing of the nation,” says to Fides Kenyan Sr. Margaret Mutiso belonging to the religious congregation of the Daughters of the Sacred Heart.

“President Uhuru needs Raila to be able to move the nation forward and leave behind a legacy as he ends his second term as Kenya’s president; Raila needs President Uhuru to pursue his agenda of reforms more effectively,” Sr. Mutiso continues, referring to the leaders with their Christian names.

On 30 January Odinga proclaimed himself “President of the people” challenging Kenyatta, with a move move that resulted in a political stalemate.

“When two bulls fight, it’s the grass that suffers, when they stop the fight even if one is defeated, the grass begins to grow,” Sr. Jecinter Okoth, a member of the Franciscan Sisters of St. Anne in Nairobi, tells Fides reflecting about the antagonism that has persisted between opposition leader Raila and President Uhuru.

“Raila and President Uhuru have made the best move, coming together at a time when every Kenyan citizen with sound mind was waiting for a better move in Kenya. Life was getting difficult day by day for the “mwananchi” (ordinary citizen),” Fides was told by Sylvester Omondi of Subukia Parish in Nakuru diocese.

Meanwhile, Kenyan London-based Christine Akello regretted that the two leaders had taken too long to come together and tells Fides, “Although their coming together is a good move, I feel disappointed because this was to be done right after elections before so many people lost their lives.”