On Anniversary of Bishop’s Death, Cameroon’s Church Insists He was Murdered 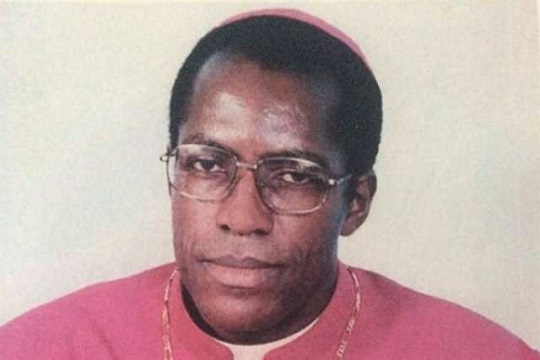 On Anniversary of Bishop’s Death, Cameroon’s Church Insists He was Murdered

A year after the death of Bishop Jean Marie Benoit Balla of Bafia, Cameroon, the president of the nation’s bishops’ conference reiterated claims the bishop was assassinated and did not commit suicide.

At least 500 people gathered June 2 for a memorial service on the banks of the Sanaga River in Ebebda, where the bishop’s car was found on May 31, 2017.

Balla disappeared from his residence on May 30, and when his vehicle was found, a note was discovered, allegedly written by the bishop, saying simply: “I am in the water.”

His body was found floating in the river by a Malian fisherman near Monatele on June 2, twelve-and-a-half miles from the bridge.

Cameroonian authorities conducted an autopsy, but the results were not released.

Later, a forensic diagnosis commissioned by INTERPOL, the international police service, concluded that “no trace of violence” was discovered, and the bishop died by drowning.

The Cameroonian bishops, however, have since rejected the report, insisting that they have evidence Balla was “brutally assassinated.”

During the Mass marking the anniversary of his death, Archbishop Samuel Kleda of Douala – the president of Cameroon’s bishops’ conference – reiterated the bishops’ claim Balla was murdered.

“We continue to question the circumstances and the reasons for the assassination of our brother,” Kleda said.

The archbishop said to understand the situation, it should be integrated into the “long dark series of assassinations of consecrated people in our country. In this domain, Cameroon leads in Africa, if not the world.”

In June 2017, Father Armel Djama, rector of the Minor Seminary in Balla’s own diocese, and a priest in Cameroon’s South West Region, Father Augustine Ndi, were found dead in their rooms.

Clerics were at risk even earlier in Cameroon’s history: Between 1988 and 1991, one bishop, six priests, and three nuns were all found dead. The results of those investigations were never made public.

Kleda said past assassinations of priests had seen a “complicit silence” from the state.

“We hope that Bishop Balla’s assassination will not witness the same end,” the president of the bishops’ conference said.

Archbishop Jean Mbarga of Yaoundé marked the anniversary with a more measured tone.

“We have come to raise Bishop Balla from the dead, so that he can live eternally … We got him out of water one year ago, let’s raise him from the dead.”

He said the Catholic Church in Cameroon was still waiting and hoping that the cause of his death will be established but called for patience.

Holding back tears, Balla’s nephew, Alexis Benoit Balla, said his death had left a huge vacuum in the family, but insisted that the family was happy because it now has a saint to watch over its members, even as he insisted that the bishop was murdered.

“The feelings are shared,” he told Crux.

“We have a feeling of joy, for as Archbishop Kleda said, we must commemorate the parting of this servant of God. The entire family shares this joy, because we have a saint in the family; we know he is praying for us night and day; just as we pray for him,” the deceased bishop’s nephew said.

“After the joy, the sadness of having lost a member of the family sets in. We want the truth to triumph. As I have said before, he was assassinated. I say this because we spoke on the eve he went missing. He told me he was already in bed. How could he leave his bed to go and fall into the river?” Balla asked.

The murder claims were also highlighted by the Bishop of Bafang and the Apostolic Administrator of Bafia Diocese, Bishop Abraham Komé.

“We wanted the society in general and those responsible to know that the passage of time will not be enough for us to forget Bishop Balla,” he told Crux.

“It’s a matter of conscience,” Komé said. “At the end of this commemorative Mass, we want the people in charge of the investigation to bring out the truth. We didn’t want to kill [Bishop Balla] a second time, and that is why it was necessary to organize this ceremony to continue his works,” he said.

During the memorial service, a woman in her 70s caused tears when she said: “My Lord, I came to tell you that I know you are in Paradise. You prayed for us here on earth, continue to pray for us where you are now. We will forever miss you.”

Meanwhile, the president of the Chamber of Criminal Experts of Cameroon, Steve Francis Olinga said it is absolutely necessary that the results of the investigation into the death of the bishop be made public. He also said he thinks Balla was murdered.

Olinga said Balla’s body “did not present signs of someone who died by drowning. He should have had a bloated stomach or his feet should have been scaled by fish. None of these signs were there.”

Kleda said he thinks Balla was tortured, killed and dumped into the river to create a false impression of suicide.

“Why was our brother killed? Why did the assassin’s hands hit an innocent person?”