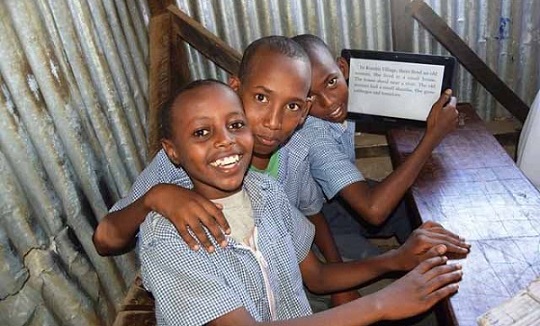 But he also called on them to offer “digital access to the sacred texts of various religions” in local languages, saying it “would be a beautiful sign of care for the religious dimension so deeply rooted among African peoples, and a sign also of encouraging interreligious dialogue.”

The pope’s remarks came during an audience on October 5 with representatives of the Vodafone Foundation and the managing director of the Vodafone Group, who explained their Instant Schools for Africa programme to the Pope.

Launched this autumn, the initiative provides a “digital school in a box.” One hard-shell wheelie suitcase contains a 3G modem, 25 tablets, a laptop, a projector, speakers and a battery charging station, according to the Vodafone Group. The kit provides free access to online educational resources for students in central Africa, ages 7-20.

The “instant classrooms” were also being distributed to schools in refugee settlements in Kenya, Tanzania and Congo in partnership with the UN High Commissioner for Refugees. Millions of children spend an average of 17 years displaced from their homes and with limited access to education, the Vodafone Foundation said. It said it hoped to reach at least 62,000 children and young people in refugee settlements by the end of 2016.

Pope Francis wished them success with their project, “which from what I have heard, I like a lot.”

He said he liked that it was something “constructive, and today we need to be constructive, to do things that lead humanity ahead, and not merely look on as bombs fall on innocent people, children, the sick, entire cities.”

He noted the project was a part of wider public and private efforts “to promote a more inclusive and supportive world.”

He expressed his appreciation for the initiative and suggested they “provide these young people with some orientation in methodology, so that they can learn not only how to use tools, but how to use them as tools, thus enabling them to bring out the best of these means in a free and critical way.”