Missionaries of Charity in the Diocese of Maralal, Kenya 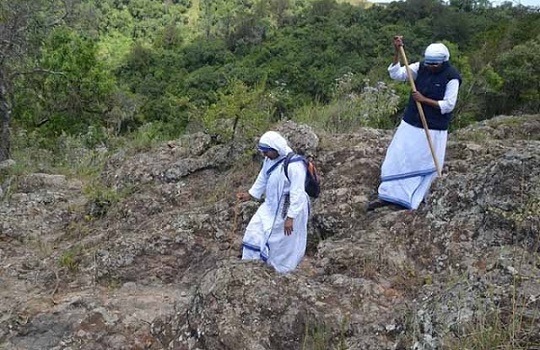 Missionaries of Charity in the Diocese of Maralal, Kenya

The Missionaries of Charity in the Catholic Diocese of Maralal are a happy lot after the canonization of their founder, Mother Theresa of Kolkata on 4th, September 2016. This has renewed their faith and zeal to serve the poorest of the poor.

In an exclusive interview with Waumini News Today, Sr. Jane Maria MC said, the Sisters received the news of the canonization with a lot of joy.

“I was so happy that Mother Theresa has been made a saint, I lived with her in Kolkata for a year, and I am excited that one of the people I knew personally is a Saint because I am sure she continues praying for me and the others,” said Sr. Jane Maria.

In Kenya, the sisters who follow closely in the footsteps of St. Theresa of Calcutta serve in one of the remotest and inaccessible villages of Samburu County inhabited by the Samburu, Pokot and Turkana people who are mostly pastoralists.

According to Sr. Jane Maria, the nuns rescue infants as young as one day old whose mothers have died; nurse and feed the elderly; preach to alcohol addicts at their drinking den and invite them to daily Mass at the Sisters’ convent. They also visit different communities to evangelise and to advocate against Female Genital Mutilation (FGM) and against early marriages for young girls. Instead, they encourage parents to educate all children.

Every Saturday two or three Sisters led by Sr. Jenny Rozario go to a village known as Malasso where the plateau drops 8,000 feet into the Rift Valley. There they meet a community still steeped in its traditions and culture.

The Missionaries of Charity Sisters in Maralal are currently educating 11 street children in a boarding school and take care of 15 children below the age of 5. Where possible, the children are later reunited with their extended family members or given up for adoption.

Sr. Jane Maria is happy that through Catechism classes, two primary school going girls from Malasso village in the Great Rift Valley have received the Sacrament of Baptism after successfully attending Catechism classes.