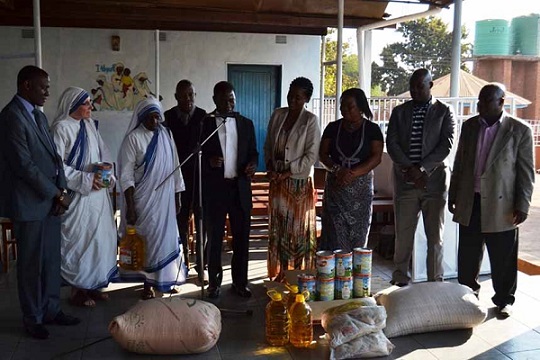 Catholic Members of Parliament (MPs) on Tuesday this week donated assorted food items to Mother Teresa Children’s Houses, a Kawale base orphanage centre in Lilongwe being run by the Missionaries of Charity Sisters of the Catholic Church.

Speaking on behalf of the MPs, Leader of the Catholic Community in the Malawi National Assembly, Hon. Francis Kasaila said as Catholics they thought it wise to join the rest of the Catholic faithful this year of Mercy by doing charitable works.

“You know this is the Year of Mercy as it has been declared by our Pope-Pope Francis and as Catholic Community at Parliament we thought that we do something in order to support those that need our support,” said Kasaila who is also Leader of the National Assembly and Parliamentarian for Democratic Progressive Party (DPP) in Nsanje Central Constituency.

He said after thorough consultation with their Patron Priest, they decided of doing something in supporting the Missionaries of Charity Sisters who are taking care of the orphans.

“This is just a small donation of course otherwise we know that these sisters need a lot of support from well wishers and people of goodwill. They really need quite a lot in order to care for these children,” he said.

According to Kasaila, they are Catholics first and politics comes second, therefore it is their duty to demonstrate true Catholicism by doing charitable works especially this year when Catholics all over the world are observing the Year of Mercy.

Juliana Lunguzi, a Member of Parliament for Dedza East of opposition Malawi Congress Party (MCP) who took her time off to sing Catholic songs with the children at the centre said it is their duty as parliamentarians despite their political differences to come together and join hands in supporting the needy including orphans.

She said they will continue making such donations hence appealed for people of goodwill to pray for them so that they deliver well in their respective constituencies and at the same time be able to fear God in whatever they do.

Speaking on behalf of the Community, sister Mira commended the parliamentarians for their generosity and kind gesture by donating to the orphanage.

“Imagine, in this children’s centre we have 52 children whom most of them are abandoned children, some lost their mothers and some lost both parents. We would want to discourage the tendency of aborting innocent children as well, therefore, let those that feel wouldn’t manage to take care for their children, bring them to this centre rather than aborting or abandoning the innocent souls,” said sister Mira.

He said as Catholics, they need to demonstrate some sense of love and care in which other parliamentarians will emulate from them.

The parliamentarians donated 10 bags of maize,3 bags of beans, cooking oil and milk, totaling the amount of 300,000 Malawi Kwacha and they have also donated 200,000 towards the conference of World Union Catholic Women’s Organisations (WUCWO) scheduled from 29th August to 5th September this year.

The Missionaries of Charity is a Roman Catholic Religious Congregation founded in 1950 by Mother Teresa of Calcutta, which now includes over 4,500 sisters in more than 130 countries.