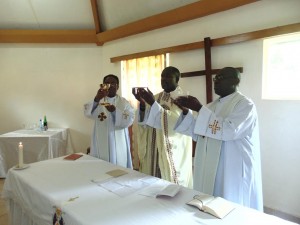 The Executive Secretary of the African-European Faith and Justice Network (AEFJN), Rev. Fr. Chika Onyejunwa, has asked Christians to go beyond the spirituality of the Gospel and incarnate its (Gospel) values in the world. The Gospel, he said, “ceases to challenge us when we see only the spiritual and ritual aspects of it.” Fr. Onyejunwa made this remark in a homily today, November 22, 2015, during the Pre-Opening Mass of a Continental Conference on Land Grabbing and Just Governance in Africa that is taking place in Nairobi, Kenya, from November 22- 26, 2015.

He further called for a totally new understanding or interpretation of sin, by explaining that sin can also be likened to living in situations of injustices and not taking the needs of others into consideration. He noted that, more often than not, Christians dwell too much on the spirituality of the Gospel thus making it to lose its revolutionary spirit. He therefore hoped that “the Conference will reawaken our conscience to the challenges that are militating against our making the world a more humane place for all to live in.”

The Conference will discuss the following subjects: Land Reform; Mining; Climate Change, Environment, and Deforestation. Others are: State of Land Grabbing in Africa; and The spirituality of land in African culture.

Participants from the different Justice and &Peace offices will present brief reports of the various land grab cases in their respective dioceses or countries. These will be compiled as part of the outcome of the Conference.

The Conference is being organized by Africa Faith & Justice Network, USA; AEF&JN; CIDSE; and SECAM.

The Opening ceremony, tomorrow, will be addressed by the President of SECAM, and an Official of the Government of Kenya.