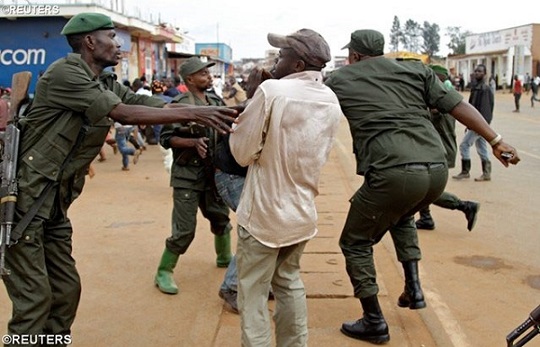 Residents of North Kivu in the Democratic Republic of Congo have staged a week-long silent protest intended to send a message to the kidnappers of two Catholic priests kidnapped Sunday 16 July from a parish of Bunyuka. Activity in the area came to a complete standstill as residents shunned farms and public spaces. Silence marked entire villages. It was the least they could do in the face of all manner of gunmen.

Bishop Sikuli Paluku Melchisédech of Butembo-Beni, who confirmed the silent protest to Vatican Radio said that Fathers Charles Kipasa and Jean-Pierre Akilimali, parish priest and assistant respectively, were abducted on the night of Sunday 16 July from their parish house of Marie Reine des Anges de Bunyuka by “men in uniform.”

“It is with great sadness that we inform you that Fathers Charles Kipasa and Jean-Pierre Akilimali, respectively parish priest and vicar of Marie Reine des Anges de Bunyuka were abducted on Sunday around 9 pm by a group of ‘men in uniform,’” Bishop  Melchisédech said in a statement.

The kidnap was accompanied by the looting of two parish vehicles, two motorcycles and several goods of the parish. The vehicles were later found dumped in the forest along the Karuruma road. The motorcycles are thought to have been used to spirit away the two priests.

Soon after the abduction of Fathers Kipasa and Akilimali, some parishioners rang the Church bell, and the faithful who rushed to the parish house started a silent protest against extreme insecurity in the area. All of last week since the abduction, both Catholics and ordinary residents simply stayed at home and did not go to their fields.

Catholic Bishops under DRC’s Conférence Episcopale Nationale du Congo (CENCO) have appealed for the immediate release of the priests. Bishop Melchisédech of Butembo-Beni urged the faithful to persevere in prayer for peace and security.

“We strongly condemn this kidnapping of priests and ask that they be released immediately without delay so that they can fulfil their pastoral mission. We ask all the faithful of the diocese and people of good will to remain vigilant and to persevere in prayer for the peace and security of all in our Province of North Kivu,” said Bishop Melchisédech.

According to the local publication, BeniLubero Online, which documents in very graphic terms, atrocities in the area, the abduction of the priests recalls another case of the kind that occurred in October 2012 in Mbau.  Three Assumptionist Catholic priests abducted at the time have never been found.

Founder of the Online publication, BeniLubero Online, Fr. Vincent Machozi was killed in Bukavu by gunmen in March 2016. In December 2016, a Franciscan religious sister, Sr. Marie-Claire Kahambu of South Kivu was stabbed several times and killed, during the day, as she worked in her office at a girls’ training centre.

It is not just priests and the religious that are victims of the violence in Congo’s Kivu area. The local civilian population bears the brunt of most of the violence as BeniLubero attests. Workers of Faith Based and humanitarian organisations such as Caritas have also not been spared.