How Catholics Brought Women's Equality to a Cameroon Clan 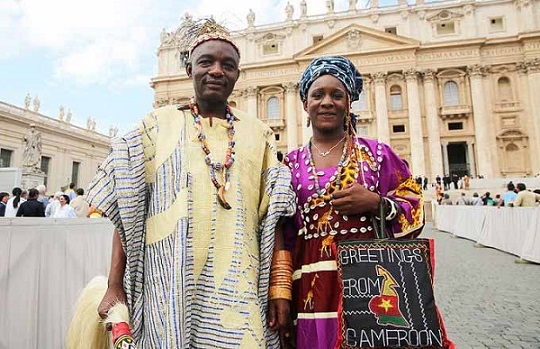 How Catholics Brought Women’s Equality to a Cameroon Clan

A region of Cameroon that traditionally believed women to have no value now sees them as equal to men, thanks to a lay Catholic apostolate in the area.

“Before the coming of the Focolare Movement, the women had no say, but the movement has taught us a lot of things,” said Nicasius Nguazong, who is the Fon – similar to a king – of the Cameroonian chiefdom of Nwangong.

Fon Nicasius and about 40 other pilgrims, including other heads of northwest Cameroonian clans, travelled to Rome to mark the 50th anniversary of the Focolare Movement first coming to the Bangwa people.

Mafue Christina Fontem – whose role is similar to a queen – testified at a press conference afterward that her father, after meeting the founder of the Focolare Movement, a woman named Chiara Lubich, carried out a campaign for the higher education of women.

“And because of that,” she said, “you will find that those of us who are here, his daughters, went to school, and you also have among us a granddaughter who is here from Germany.”

“We had something in our tradition that we always said: ‘a woman is worth nothing’,” Mafue Christina reflected. “But with the coming of Chiara, women got emancipated.”

The Focolare Movement, a Catholic lay apostolate, was originally founded by Chiara Lubich in 1943. It was begun during World War II as a path of spiritual and social renewal.

Using the inspiration of Jesus’ prayer in John 17:21, “May they all be one,” the movement now exists all over the world; it aims to create unity through the use of dialogue and relationships among individuals, peoples and cultures.

Although it has Catholic roots, people of every age, vocation, religion and culture belong to the movement.

“Before the coming of the Focolare Movement, they didn’t encourage education for girls because they thought that a woman’s place was in the kitchen,” Fon Nicasius said.

But now, men and women share in the housework, instead of women doing everything, which used to include bending over to chop firewood while carrying babies on their backs, said Mafue Christina.

“This comes from the teaching of the Focolare Movement of loving one another as Jesus has loved us,” she said.

Mafue Christina told a story about a time when a woman left the house to go to the farm. When she returned, her husband had drawn a warm bath for her and invited her to take a bath and rest. She was very surprised, Mafue Christina said, “because it was not part of their culture. This was the culture of the disciple of love.”

Speaking from a man’s perspective, Fon Nicasius said that now, even in their traditional councils, it is acknowledged that women have a say and they have been given positions of responsibility.

He praised the efforts of Catholics in his country, saying, “The good works of the Focolare Movement and the Catholic Church cannot end in our own reign.”