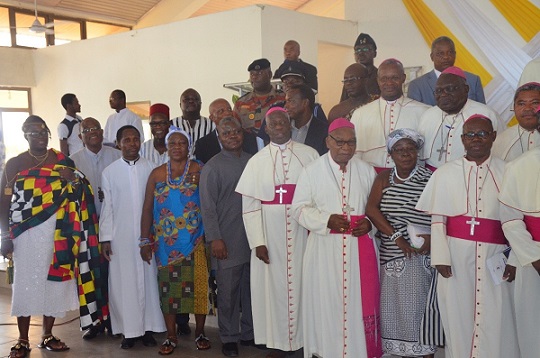 Members of the Ghana Catholic Bishops’ Conference (GCBC) are meeting in the Volta Regional Capital Ho to discuss issues related to marriage and family life in the light of Amoris Laetitia.

Speaking during the opening of the annual plenary assembly, GCBC President, Archbishop Philip Naameh of Tamale expressed worry that the Ghanaian family was experiencing emerging trends which were at variance with the ideal family image foreseen by the Church’s tradition of faith and morals.

“The phenomenon of teenage and single parenthood, poor or irresponsible parenting, separate household and distant marriages that make couples live apart, and in some cases far away from each other, and relatives ease decisions regarding separation and /or divorce are all aspects of contemporary trends in the Ghanaian family today,” GCBC President said.

The Plenary Assembly opened Monday, November 13, under the theme, Integral Pastoral Care for the Family in the light of Amoris Laetitia.

Archbishop Naameh observed that a general trend that seemed to be affecting some youth across the social divide was their fixation on sexual functionality particularly among the young and the middle aged.

He noted that peer pressure especially for young people in towns and cities, was both physical and digital, lamenting that social media rule their lives and they must organise their experiences according to their dictates.

On traditional marriage, the Archbishop said the issue of bride price, which was frequently taken out of its original traditional context, was becoming increasingly monetarised and exaggerated.

“The expense of marrying properly according to traditional rules has become, in some cases, quite burdensome for the average young man in Ghana seeking the hand of a woman in marriage,” he said.

“There is also a general increase in the use of orthodox medicine and its attendant Assisted Reproductive Technologies in redressing fertility challenges among urban elite families,” GCBC President went on to say and added that that the Church is called upon to consider the moral dilemmas that Catholic couples face when they stand before the decision to accept or reject the use of such possibilities.

He also called on the Church in Ghana to provide some intervention on inimical traditions of widowhood, which seem to have persisted in some places and noted, “Widowhood rites of these kind are sometimes only the evident clue of worse conditions that women must suffer in the event of death of a partner or divorce.”

The Archbishop acknowledged the need for pastoral care for families considering that couples are calling on their Priests for direction with regard to faith matters.

He noted that other important concerns of integral pastoral care for marriage and family life in Ghana include psycho-spiritual resources for responsible parenting, moral education of children and holistic programme that makes pastoral counselling resources and support systems available across the marital journey.

He said that children were influenced by experiences of the day and the signs of their time, stating that they were born into an electronic environment with all that its virtual realities promise.

On his part, the Apostolic Nuncio to Ghana, Archbishop Jean-Marie Speich, said the theme for this year’s Plenary Session was apt, bringing to the fore a reflection of Pope Francis’ Post-Synodal Exhortation Amoris Laetitia.

“I appreciate the aptness of the theme chosen by the Ghana Catholic Bishops’ Conference for this Plenary Assembly, focusing on the integral Pastoral care of families which is indeed the goal of Pope Francis’ ground-breaking new document,” the Nuncio said.