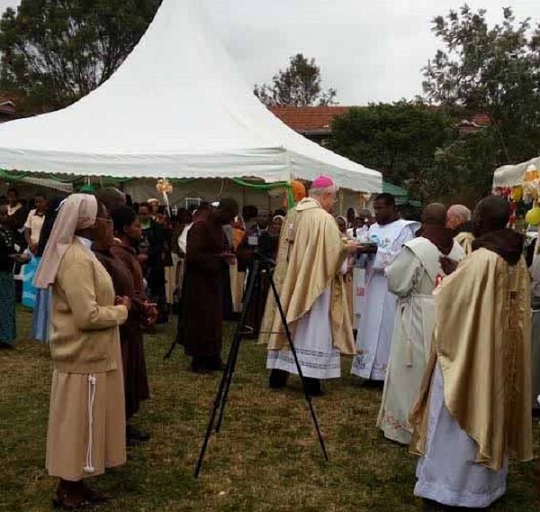 The various religious orders in Kenya adhering to the life, teachings, and spirituality of St. Francis of Assisi, the Franciscans, marked their second family day Saturday, September 3, on the eve of the canonization of Mother Teresa of Calcutta.

The day-long celebration, which brought together the different families of Franciscans both male and female Orders at their Ponticular Centre in Langata, Nairobi, was a re-union and a time to look back on the life of St. Francis and his contribution in the Church.

The Apostolic Nuncio to Kenya and South Sudan, Archbishop Charles Balvo who graced the event as the main celebrant during the Holy Eucharist, emphasized the simple lifestyle embraced by St. Francis saying, “St. Francis lived a life of simplicity and had real love for living things and the poor.”

Asked about a relationship between St. Francis of Assisi and Mother Teresa who was to be canonized by Pope Francis Sunday, the Nuncio said that the love St. Francis had for creation and the love Mother Teresa had for the unwanted, the unloved, the poor and the destitute around the world, is a sign of their total love for God and His creation.

“St. Francis and St. Teresa both responded to God’s call in different areas and they all had a central theme for the total love of God,” the continued in an exclusive interview with CANAA reporter.

“Mother Teresa had a long experience with the dark night and St. Francis shared the stigmata of Christ thus in His wounds. In their different ways they shared in the sufferings of Christ,” he explained.

The representatives of Franciscan Orders at the celebration were invited to remember St. Francis as an ecologist who valued God’s creatures and cared for them with love and respect, proclaiming peace in the world through his actions.

The Nuncio went on to urge the Franciscans to bear in mind the recent initiatives of the Holy Father saying, “Pope Francis’ ministry has been to promote love for all created things, and in this Extraordinary Jubilee Year of Mercy and in his encyclical letter, Laudato si’, the Pope’s theme and message has been, ‘Show mercy to our common home.’”

“Pope Francis declared September 1st as World Day of Prayer for the Care of Creation as the Orthodox Church has been doing since 1989, and therefore it is time we ask God to forgive us for misuse of the things which are around us and for all the ways we have not respected creation,” the Nuncio said told the Franciscans in conclusion.

The Franciscans in Kenya had their first family day on September 5, 2015.