Feeding on the Body of Jesus with Only Your Eyes Does Not Satisfy, Cardinal in Kenya Challenges Catholic Families 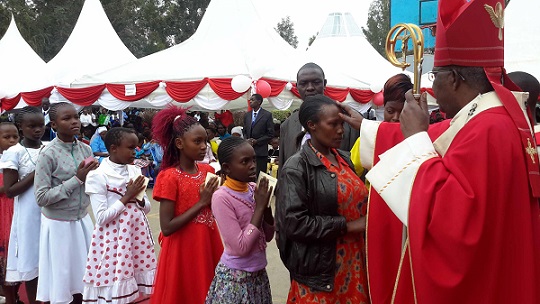 Feeding on the Body of Jesus with Only Your Eyes Does Not Satisfy, Cardinal in Kenya Challenges Catholic Families

The Archbishop of Nairobi, John Cardinal Njue Sunday, August 28, challenged couples that have not had their unions blessed in Church through the Sacrament of Matrimony to do so in order to fully participate in the celebration of the Holy Eucharist.

“If you feed on the body of Jesus with only your eyes, does it satisfy?” Cardinal Njue rhetorically asked the Catholic faithful who gathered at St. Mary’s Mukuru, a slum Parish in the East of Nairobi ministered by the Holy Ghost Fathers.

He was presiding over Holy Eucharist at which he conferred the Sacrament of Confirmation upon 468 faithful and blessed 660 Catholic families that had registered with the Parish council.

During his homily, Cardinal Njue asked those who were to be conferred the sacrament of Confirmation not to take the event as a formality but as a truly new beginning for them, allowing its grace to influence their respective lives in whatever situation they find themselves. 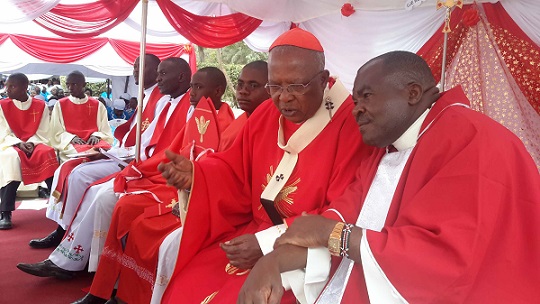 He encouraged them to become living stones by the power of the Holy Spirit to be received, actively contributing to the building of the family of God for posterity.

Some of the candidates who had just received the Sacrament of Confirmation prayed for Catholic Church leadership, peace in Kenya, in families, Small Christian Communities, the Church, and globally.

They also prayed for vocations and for the dead and voiced petitions against negative ethnicity and corruption, which contribute to the lack of peace and concluded with Pope Francis’ prayer for the Jubilee Year of Mercy, which the entire congregation recited.

Cardinal Njue also acknowledged with appreciation the work of the missionaries in Kenya saying, “We are where we are thanks to the immeasurable love of the men and women who came from so far and came among us, not because we owed them anything, which they came to reclaim. No! They came to show us the way to salvation prepared for us by God through His son Jesus Christ.” 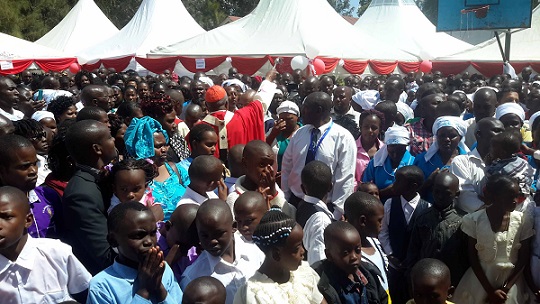 “We are here as fruits of the work accomplished by the missionaries,” he added.

At the end of the Eucharistic celebration, Cardinal Njue commissioned those who had received the Sacrament of Confirmation to be at the forefront in doing what is good and to be living stones that build a strong Church, one founded on Christian values.

Established in 1996 by the Holy Ghost Fathers (Spiritans), the Parish has six outstations, 111 small Christian communities, and a population of about 15,000 faithful.

Below is the full text of the Chairman of the Parish during the visit of John Cardinal Njue, which includes parish statistics.

SPEECH BY THE CHAIRMAN OF ST. MARYS CATHOLIC PARISH, MUKURU DURING THE VISIT BY HIS EMMINENCE THE CARDINAL JOHN NJUE ON 28th AUGUST, 2016

His Eminence the Cardinal John Njue, all protocols observed, we welcome you to St. Marys’ Catholic Parish, Mukuru. It is indeed a privilege and honour to host you in this parish today, the 28th day of August, 2016, as we celebrate the spiritual growth of our parish.

It has been a long journey for this parish which started in 1996 with just a few Christians worshipping in a small structure and only one Small Christian Community.

Although the major part of the parish is an informal settlement, we are proud that the Christians are united and eager to cultivate a spirit of togetherness while forging ahead spiritually.

The Parish Priest, Fr. Vincent Makokha and the Assistant Parish Priests, Fr. Robert Wafula and Fr. John Munjuri have played a critical role in holding the Christians together, which has created a conducive environment for the development so far being experienced in Mukuru.

Today’s function where four hundred and sixty eight (468) children are receiving their confirmation is a testimony to the growth in faith that we are currently articulating in our Parish.

The above successes though have been achieved against a back drop of challenges that have majorly impacted negatively on the growth of the Parish.

The acquisition of ownership documents for the parcel of land in which the temporary church structures are built has been a serious impediment to the progress of the centres within our Parish. It is worth noting that five centres do not have title deeds, while the only centre that has the title deed is struggling to increase the size of the plots so as to build a reasonable size of the church. In the process all the meagre resources generated goes towards the acquisition of land instead of the construction works.

Consequently, the larger part of the Parish population are in the informal settlements, which means they are not permanently settled in those areas. This has made it difficult to have a consistent number of registered members in the small Christian communities. To compound the problem further the same populace expects more from the church, in terms of material things than them providing to the church thus retarding the development of the Parish.

Despite all these challenges, we appreciate being in this Parish and will endeavour to develop it with the available resources.

Your Eminence, despite your busy schedule, the St Marys’ Catholic Parish fraternity wishes you good health to continue the good work and request that you include us in your diary of those to be visited frequently.

Thank you and May God bless you