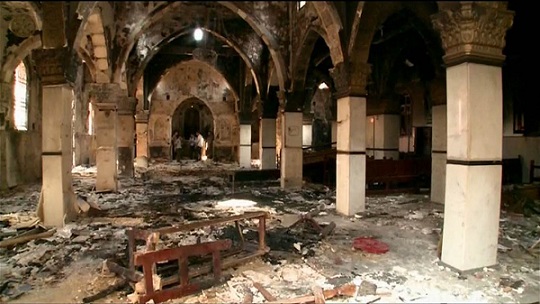 Egypt’s Copts Christians in the village of Ezbat Al-Forn, in the Minya governorate, have their church re-opened after it was forced to close “for security reasons” last month, and celebrated this with a mass on Sunday morning (10 September) – the same day that another village church reopened elsewhere in Minya.

The first mass at the reopened Saint Mary and St Michael Coptic Orthodox church, which meets in a private home owned by the Diocese, was led by Fr Daniel Babawy with Minya police forces present to provide security for fear of reprisals from the Muslim community, as reported by Coptic news site Watani. In fact, some Muslims visited the Copts to congratulate them at the reopening of their church.

The community of 400 Coptic Christians in Ezbat Al-Forn were stopped from holding Sunday mass and banned from the premises by police on Sunday 20 August.

Police said the Copts, who were meeting in a private home, lacked a permit to use the home to practise religious rites, but the official police report shows that the decision was taken following complaints by local Muslims, after which World Watch Monitor understands the police shut the church for the Copts’ protection.

According to Watani the Coptic community in the village of Kidwan – also in Minya – also saw the reopening of their church last Sunday. Like the village church in Ezbat Al-Forn and many other Coptic places of worship, the Copts in Kidwan meet in an unlicensed building, which had been used for worship for several years before the local authorities closed it, under the pretext that local Muslims threatened violence should the church reopen.

In a statement issued in August, Anba Macarius, Bishop-General of Minya, expressed his disillusionment “at the failure of negotiations with security authorities in Minya to reopen churches closed by security order” because churches either lacked security approval or were considered offensive to Muslims and therefore a threat to social harmony.

Following the reopening of both churches, Bishop-General Macarius issued another statement, alongside one other local Coptic leader, saying that “the Copts of Minya and Abu-Qurqas offer their thanks to President Abdel-Fattah el-Sisi for his response to their call for help [to reopen the closed churches] and for his understanding of their suffering”. They also thanked Minya Governor Essam al-Bedeiwi, Interior Minister Magdy Abdel-Ghaffar, and the local security officials. The statement said the Copts were also grateful for the official promise to open other closed churches.