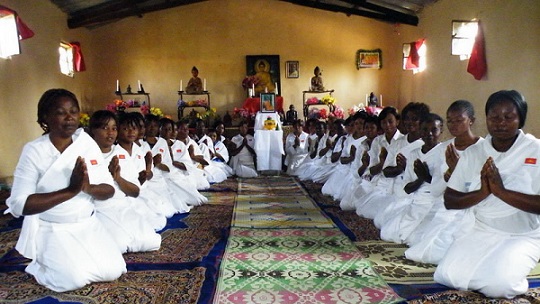 Congo’s bishops criticized continued obstruction of a church-brokered peace accord and urged citizens not to blame Catholics for the deadlock.

“Our country risks plunging into uncontrollable disorder,” the bishops said, urging the people “not to lose courage.”

“The long wait for a peaceful democratic alternative is expressing itself in impatience and tension even toward our bishops’ conference, which is only trying to mediate. Recurrent threats and violence are being fueled by manipulation shamefully directed against the Catholic Church,” they said in a pastoral letter presented at a Feb. 27 news conference in Kinshasa.

The letter said worsening tensions risked “leading the nation to implosion and chaos” and condemned deadlock over the planned nomination of a provisional prime minister and government.

It also asked Catholics to protect church property and avoid “yielding to provocations, discouragement and fear.” It spoke of recent attacks on Catholic clergy and property, including a seminary in Kananga and eight separate churches in various towns.

“The bishops’ conference is only playing a mediatory role,” the letter said. “Faithful to its apostolic mission, it seeks to accompany the Congolese people in putting the accord into practice.”

The letter urged U.N. peacekeepers to support the planned election timetable and do more to protect local communities.

“We deplore the interruption of schooling, lack of humanitarian assistance and imminent risk of famine,” the bishops said.

“Where the forces of order are inactive or absent, groups of individuals are forming militias or community self-defense groups, made up largely of minors and children who engender further violence. While seeking to re-establish public order, interventions by the national police and army are, unfortunately, in some cases, unrestrained and disproportionate.”

The letter blamed insecurity on a variety of factors, including lack of administration on the part of the government, “impunity which favors neglect, the politicization and instrumentalization of customary power and the porousness of our country’s frontiers.”

The bishops’ conference launched a mediation bid when opposition leaders accused Kabila of seeking to retain power after his second and final term expired Dec. 20.

Under a Dec. 31 peace accord negotiated by the bishops, the president will remain in office pending elections by the end of 2017, alongside a government headed by an opposition-nominated prime minister. Kabila must comply with constitutional provisions barring him from a third term.

However, press reports said the accord’s implementation had been left in doubt by the Feb. 1 death of opposition leader Etienne Tshisekedi, who was to have headed a 28-member National Transition Council.

The Catholic Church makes up around half the 67.5 million inhabitants of the mineral-rich Congo, formerly Zaire, where up to 6 million people died in 1996-2003 conflicts.

If successful, the accord will ensure the first ever peaceful power transition in the country, where armed groups have exploited regional instability since Kabila succeeded his assassinated father in 2001.