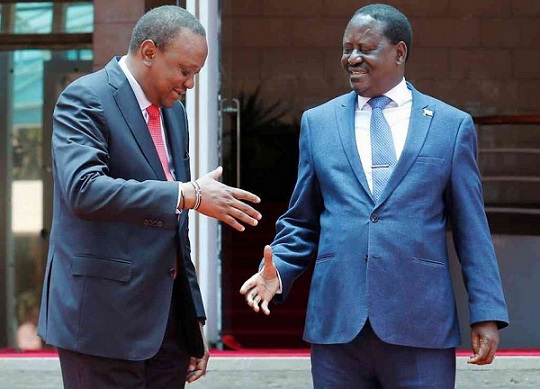 The 14-member task force translating the Uhuru-Raila handshake into actionable bridge-mending initiatives has its work cut out.

Upfront, the handshake is, undoubtedly, a positive move at the highest level towards national unity.

But, as the sage would say, let us not exaggerate the much it can achieve. It has its limits. The handshake is a foundation; it is up to us to build on it. We can build a Kitisuru or a Kibera with a Nyali or Budalang’i bridge on it. The kind of contractor we engage will determine our use of the bridge.

This is actually the first cautionary point: The handshake is corruptible.

Anyway, several past commissions and task forces finalised and presented their reports to the appointing authorities. Somehow, we implemented bits of the report and “moved on” — classical Kenyan way of avoiding responsibility to get under the bed and clean it up for a healthier living.

What, then, does the task force have to do?

If the spirit of the moment is on legacies of President Uhuru Kenyatta and former Prime Minister Raila Odinga, it is imperative that they realise the future of the country, away from the ‘Big Four’ agenda, squarely lies on two things: The willingness of the people to voluntarily follow their leaders, and the freedom of people to manifest a sense of belonging in whatever they do and wherever they are. For the latter, simply don’t suffocate freedoms for the civil society, including the media.

Unlike its critics on the basis of age, I see great potential in the task force. Take courage from Pope John XXIII, who was elected to the Papacy at a very advanced age. As it turned out, it is this ageing Pope who caused one of the greatest turn-arounds in the Catholic Church through the Vatican II Council.

The church is still implementing the 1962 recommendations.

Being wise men and women of great knowledge and experience, therefore, the task force should consider that a country where corruption and electoral confusion reigns every time we run election campaigns means the social moral fabric is extremely weak. We face a moral, not legal, crisis.

Now that we have the handshake foundation to build a moral bridge on, help the two leaders to publicly talk about what went wrong in the last elections that we did not have a conclusive presidential outcome, resulting in a legitimacy deficit for the man who was sworn in.

The tension that the handshake diffused was fuelled by the inconclusiveness of the poll, which led to the swearing in of the ‘people’s president’.

If it is too much to ask of the two leaders, can the task force take moral responsibility and plainly help us to understand what went wrong, so that future elections can better be planned and avoid the perennial confusion? Please stick to the truth!

The legacy of any leader depends on the willingness of the people to be followers voluntarily — through the ballot. The many contradictions in last year’s elections will taint the legacy of the ‘Big Two’ if people are coerced into followership.

Most of our elected leaders are, arguably, thoroughly corrupt because they corrupt their way into office. Their main task once in office is to recoup their ‘investment’. Besides, getting jobs and promotions in our many governments (county and national) depends on whom you elect. How can corruption, ethnicity and deadly fights not thrive using this bridge?

To systematically fight corruption, start by holding a clean election in which every vote counts and every vote is counted. The day we hold a conclusive election — not just for the presidency but all seats, from the ward level — we will meaningfully and realistically start building founded bridges on healing, reconciliation and economic prosperity.

The handshake task force should simply focus on electoral grievances and electoral systems to achieve its goal.