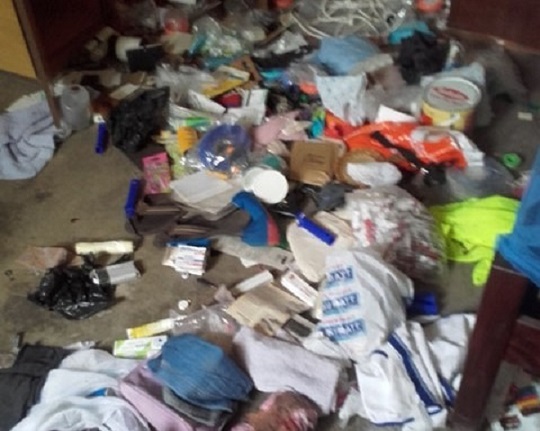 The residence of the missionaries and a workshop used as a vocational training centre have been looted in Kajo-Keji, South Sudan. That workshop had been set up to train people to develop skills and learn different professions such as carpentry, ironmonger mechanic, masonry, weaving and bakery. It also produced good quality furniture for schools, churches and offices.

Kajo-Keji’s population was forced to leave the area due to violence and fear of further clashes between SPLA and armed individuals. People have resettled in Uganda as refugees. The missionaries that have been evangelising in Kajo-Keji area have accompanied their flock and settled near the refugee camps to pastorally assist their faithful.

The missionaries responsible for the running of Kajo-Keji’s workshop and vocational training centre returned to the place to pick up the goods they had left behind. Surprisingly, the missionaries found that the workshop and their residence had been looted.

“We went to our residence and found that the house was looted, all the solar panels were removed from the roof and all the doors were broken. They had scattered all our belongings on the floor”, narrated one of the missionaries.

He further said that “looters have broken the doors of two containers in the workshop, despite the doors had been being welded. They looted all the bicycles, motorbikes, solar panels, solar lamps and all the medical equipments of the dispensary of Mondikolo and have stolen many other things from the compound”.

The missionaries reported the looting to the SPLA commander whose troops are in the town. According to the missionaries, the commander said that “the compound had been looted four days earlier by rebel groups and that the SPLA had tried to stop them and was able to recover a motorbike and an electric bike”.

All the houses and the stores along the road of Wudu in Kajo-Keji have been reported looted.

“It is really sad to see those kinds of things happening in Kajo-Keji”, added the missionaries who collected what remained and went back to Uganda.