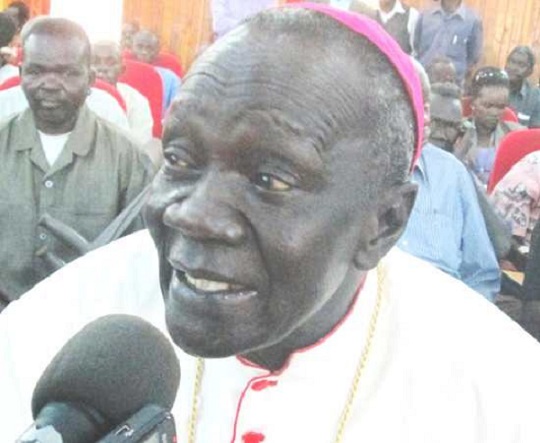 Church members and citizens of South Sudan are mourning the passing on of Bishop Rudolf Deng Majak, 76, of the Catholic diocese of Wau.

Bishop Deng died Monday, March 6, at a relative’s residence in the city of Siegburg, Germany, while awaiting an operation that had been scheduled for Tuesday, March 14.

“His death has touched the hearts of thousands of faithful here in Wau who came already during night hours to the cathedral to express their sympathy and who prayed for him,” reads in part a message from the late Bishop’s diocese of Wau, shared via email on Tuesday, March 7 by Sebastian Kämpf and Tatjana Gerber.

Before traveling to Germany, late Bishop Deng had stayed in Nairobi for close to two years attending to his health.

Reacting to the Bishop’s death, the Apostolic Nuncio to Kenya and South Sudan, Archbishop Charles Daniel Balvo, has said, “The death of Bishop Rudolf Deng was a surprise. Although he had some health difficulties, I had seen him from time to time here in Nairobi.”

The Nuncio went on to say in a message to CANAA on Wednesday, March 8, “Since I have been Apostolic Nuncio in South Sudan, I met him on a number of occasions, particularly at the meetings of the Bishops and Ordinaries of South Sudan. In December 2014, I spent some days with him in Rumbek, at the combined Eucharistic and Youth Congress. It was a memorable occasion, with the participation of a good number of young people.”

The Nuncio hopes to join the clergy, religious, and faithful who will turn up for the burial of the late Bishop Deng.

“As of yet, I have not had the opportunity to visit the Diocese of Wau but I am sure that the priests, religious and lay faithful will feel and mourn his loss,” the Nuncio told CANAA and added, “I join in their sorrow and, although the details of his funeral are not yet known, I expect to be present.”

The death of Bishop Deng leaves four of the seven Catholic dioceses of South Sudan without Bishops.

“With regard to the appointment of bishops for the vacant Diocese of South Sudan, we are working hard at it, despite the many challenges presented by the situation in the country,” the Holy Father’s representative in Kenya and South Sudan told CANAA.

On his part, Jesuit Father Salvador Ferrao ministering in Rumbek diocese, South Sudan, has told CANAA that since meeting the late Bishop in 2001 at AMECEA Secretariat in Nairobi, they have had regular contacts.

“Bishop Deng invited me now and then to his diocese to preach retreats or give seminars,” Father Ferrao said and recalled, “In one of the retreats or open session with the Bishop one of his priests had a heavy argument. Afterwards I asked him that it would have been better that the priest could have discussed privately instead of embarrassing. To that Bishop replied that he had developed Strong Shock Absorbers.”

“It was interesting to see him at his office desk. On his desk there was a pile of files and books as high as half a meter, but he knew where things were and he could pick it up and get it for you,” Father Ferrao narrated to CANAA.

“Often I offered him new books which he appreciated. Once he was going to Juba to meet the President I asked him to give some books to Salva Kiir. Among them was How Big is your God,” Jesuit Father Ferrao told CANAA.

“Finally, I met him last year in Bethany House Nairobi. When I knocked his room, he came out and told me that he was reading in the New Testament that we are vessels of clay, fragile, I did not take him seriously probably that he was going through. I gave him pocket watch just to destruct him from sickness. I stayed overnight together with Fr. Osman Andrea just to give him company and during recreation after dinner he never complaint about his health, when asked who was cooking for him he said He was managing. I noticed his speech was affected,” said Father Ferrao.

The Jesuit Father Ferrao concluded in his email to CANAA, “In Portuguese there is saying’ I am sick in Lisbon but the sickness is in Bilbao. We took him for granted as if he was thinking sick but we gave no serious attention, and he did not complain.”

On social media, some South Sudanese have mourned the late Bishop Deng. Here are a couple.

A generation of the Catholic pastors of God who gave hope to the suffering people of the Sudan is coming to an end. From Bishop Gassi of Tombura, Bishop Akio of Torit, Bishop Mazzolari of Rumbek, and now Bishop Rudolf Deng. Rudolf Bishop Deng Majak was a man of God whose teachings were pragmatic, his every sermon contained: (1) A reminder to everyone of the fall of man from grace in Eden the garden of God and how sin has disfigured man to become beastly in his every act; (2) The importance of keeping the ten commandments, (never tiring to recite them to his audience); (3) Emphasis on hard work. “You must sweat to eat, that’s the punishment we received the day we lost Eden”; (4) Strong messages for youth to focus on building the nation instead of engaging in ethnic and political conflicts. REST IN PEACE

Another tragedy, my lordship, Bishop Rudolf Deng Majak is gone before celebrating Easter Mass to his fellow Christians. My lordship I remembered how you make me a fellow Christian and disciple of Jesus through sacraments of Baptism and Holy Communion many years ago. I owe you much respect like my parents from the day I received those sacrament by living exemplary lives through your words as a Christian. May the lord Jesus rest your lives in eternal life.

Very sad and discouraging news that his lordship left this planet like that, you were an ambassador of peace around the globe and messenger of God making people being born again may peace remain among us because shepherd has gone. May God rest his soul in peace.

76-year old late Bishop Deng was born in Marial-Lou within the ecclesial territory of Rumbek diocese, ordained priest in 1970, and consecrated Bishop of Wau in 1995 after having served as Apostolic Administrator of the same diocese since 1991.