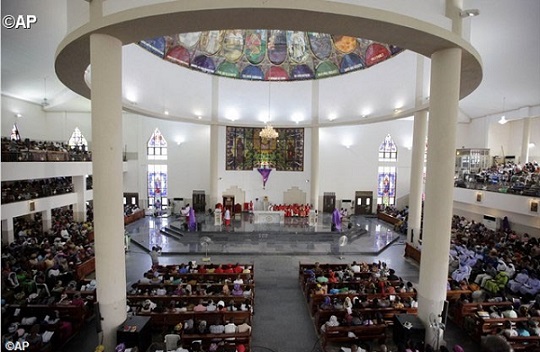 Nigeria’s Archbishop of Kaduna, Archbishop Matthew Ndagoso has described the dialogue between Catholics and Methodists as a step towards the truth for the realisation of the call of our Lord Jesus Christ that “they all may be one.” The Archbishop’s observation was contained in his opening address to the inaugural meeting of the representatives of the two Churches saddled with the responsibility of forging mutual understanding and relationship between the Methodist and Catholic Church. The ceremony took place recently at the Methodist Cathedral of Unity, Nigeria’s capital, Abuja.

“The ecumenical movement is essentially a movement towards the truth and towards each other. The extent to which we have moved away from the truth and from each other is the extent to which we are challenged to move back or return.” He added, “Above all, we should and must realise that unity is not an end in itself, but a means to an end, namely, the credibility of the Gospel message that we all proclaim. And this is the meaning of the priestly prayer of Jesus: ‘May they be one so that the world may know that you have sent me,” said Archbishop Ndagoso,

Archbishop Ndagoso traced the genesis of the meeting to the initiative towards dialogue with the Catholic Church, taken by the World Methodist Council in London in August 1967; as a follow up to the decision of the Second Vatican Council’s decree on Ecumenism, aimed at ensuring the promotion of Christian unity.  Describing the meeting as a continuation of the first meeting between the two churches at the international level held in 1967, Archbishop Ndagoso expressed the hope that delegates of the two churches take advantage of the cordiality between the two ecclesial bodies to ensure a fruitful outcome.

He declared, “The one advantage that the Methodist-Roman Catholic dialogue has in its favour is the absence of historic acrimony or the direct bitterness of schism between the two ecclesial communities;” adding that, “Consequently, Methodists and Catholics have more solid grounds for the affinity between them.”

Archbishop Ndagoso noted that the meeting is not to break new grounds on doctrinal and theological issues.

“Our task will be the facilitation of knowing, understanding and reception” of the documents of the two churches at the local level. The Archbishop added, “Ecumenical dialogue is propelled and sustained by the realization of the fact that continued divisions among Christians continue to damage the truth and the integrity of the Christian faith that we are all charged by the Lord Jesus Christ,” said the Archbishop of Kaduna.

In his own address, the prelate of the Methodist Church, Nigeria; Dr. Samuel Chukwuemeka Kanu Uche, described the occasion as a very significant and epochal gathering aimed at ensuring constant truth and unity among the two ecclesial bodies. The Methodist prelate traced the genesis of the Methodist Church and its spiritual and pastoral services to humanity. He stressed the importance of the dialogue.

“It means that the emphasis of the engagement should be that each party should strive to apprehend and appreciate any divergences in position, approaches, and traditions with a view to ensuring that both parties are mutually benefited by the ‘handshake in Nigeria’; and for the better and greater benefit of expanding and extending the Body of Christ,” said the Methodist prelate.

The dialogue between the two churches is not a new initiative.

“There is no better time to engage in the ‘handshake’ than now in order to promote harmony between our churches and to better confront the issues and challenges of Evangelism in Nigeria and the Nigerian Question,” Dr. Samuel Kanu Uche added.