Catholic Priest in Ghana Calls for Amendment of Education Curriculum 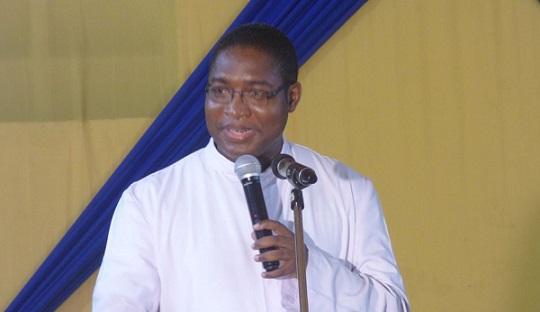 Catholic Priest in Ghana Calls for Amendment of Education Curriculum

Acting President of the Catholic Institute of Business and Technology in Accra, Very Rev. Fr. John Louis says that poverty would drastically be reduced in Ghana if amends are made to the current education curriculum to focus on entrepreneurial skill development of students.

He called on the Church in Ghana to begin negotiations with government to draw the attention of industry players to relook Ghana’s formal education system as far as subject content and methods are concerned.

This he said is a factor accounting for increase of social vices among the youth in the country.

“While the Church is doing well in providing bright future for many of the youth through its many schools, it needs to start looking at the course contents and teaching methods employed,” Father Louis said.

He added, “These need to be changed and replaced with those which equip students with entrepreneurial skills, so that the majority of those who graduate from her schools would have the capacity of self-employment. The Church needs to team up with the state to work this out.”

He made the call recently at a public lecture put together by the Accra Archdiocesan Youth Council in collaboration with the Accra Provincial Youth Council on the topic, The role of the church and family life in curbing social vices amongst the youth, in Accra.

Fr. Louis bemoaned the spate of social vices among the youth. He added that modern ways of sanctioning such as imprisonment and fines sometimes erode the social controls and, in the process, make the youth preys to social vices.

He further stated that “the family, the church and the state, have the responsibility individually and collectively to safeguard and enhance social controls against the contemporary social changes”.

Some of these, he said include families striving to eliminate causes of social vices that are within their control. Thus, broken homes, lack of parental care and supervision and parental negligence among others.

He said “Families should strive to minimize the effects of the causes of social vices. For instance, when families socialize children very well they could withstand the effect of peer pressure”.

He advised that social media and the internet be used as a tool to harness potentials.

“Families should endeavour to make ICT, especially the social media, a tool for holistic development. That is, they should teach their children to harness the merits of ICT while overcoming its demerits,” he said.

He called for the effective socialisation of children at home to enable them imbibe the norms and customs of good behaviour as well as rehabilitate those who need it.

He however added that though families, the Church and other institutions have roles to play in curbing social vices among the youth, young people have their part to play and should seek social virtues and be determined to achieve them.

Mr. Kenneth Ashigbey, the Chief Executive Officer of the Ghana Chamber of Telecommunications, who chaired the function, urged parents to be interested in the education of their wards. He said most Catholic Parents show no interest in Catholic Schools and for that matter Catholic education.

This, he said, has contributed to the rise of social vices among the youth and called on the Church to do all it could to have all its Schools back to ensure holistic Catholic education and the formation of the youth.

He called on parents to strive to be abreast with current technology to be able to implement the necessary controls to prevent their wards from being exposed to unwholesome information and pornographic materials. He said our era is an era of technology and it is expedient that all take it serious.