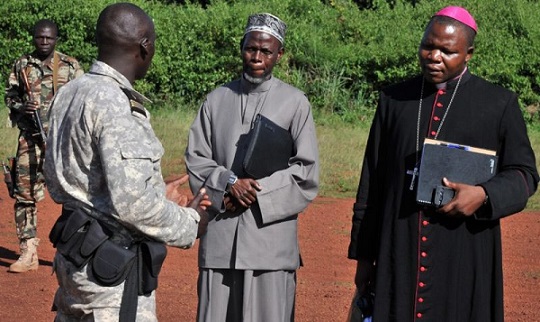 Bullet-riddled roofs line the “boulevard of death” in Central African Republic’s southeastern town of Bangassou, where almost everyone who enters is seen as an enemy.

The city, spared sectarian bloodshed until May, now has more than 2,000 Muslim residents forced to take refuge at St Peter Claver cathedral after attacks by the mostly Christian anti-Balaka militia.

More than 300 people have been killed and 100,000 displaced since May as violence that began in 2013 moves into the impoverished country’s central and southeastern regions, prompting warnings of a national conflict roaring back to life.

In Bangassou alone, more than 150 people have died in fighting between militias and UN peacekeeping forces.

“We were driven out by force. We have lost our parents, our homes and all of our belongings,” said Djamal Haddine Mahamat-Salle, secretary-general of the organisation representing the town’s displaced Muslims. “It’s been two and a half months since we’ve been here, blocked without the ability to even go beyond 100 metres.”

Many said their departure from the cathedral could mean death.

“The anti-Balaka are everywhere. And as soon as you risk leaving, they will demand ransom,” said Zarah Mahamat. She said she tried to go to the market one day to buy vegetables for her children, who no longer have even rice to eat, and was stopped.

“I had to contact my parents in Bangui and they sent me the money to pay the ransom,” she said, still wearing the same clothes she had when she fled in May.

Another resident, Jean-Claude Gbienza, blamed the UN peacekeeping mission for provoking some of the violence. He said the forces arrived in May and started shooting, causing the local defence groups that are also part of the anti-Balaka to retaliate by burning homes and fighting.

Yvette Siolo said her hand was pierced by a bullet when the UN forces came in shooting. She said the rest of her family has fled to neighbouring Congo, on the other side of the river.

On a visit to Bangassou this week, UN humanitarian chief Stephen O’Brien insisted that the UN was there to help, and he warned of growing violence.

“We see the Muslim community who became the victims of attacks and this is an alarming situation. This cycle of violence must stop,” he said, calling for more support from the international community.

“If we do not act now and keep the faith, we will see increasing need and even greater vulnerability of already weakened people,” O’Brien said on Tuesday.

The humanitarian crisis in Central African Republic, requiring some $497 million, is only 24 per cent funded, the UN says. The world body says nearly 2.4 million people are in need of aid to survive.

During O’Brien’s visit, children who haven’t been to school for months held up signs that read “No to this open prison” and “I have a right to life and education.”

Attempts at peace deals, the latest signed in June by more than a dozen armed groups, have failed.

The head of the UN peacekeeping force of 12,000 troops has acknowledged that the mission is not enough to protect civilians around the country.

The UN refugee agency says more than 60,000 people have fled into remote northern Congo since May, the majority women and children, with some sleeping in the open and “desperately” in need of food.