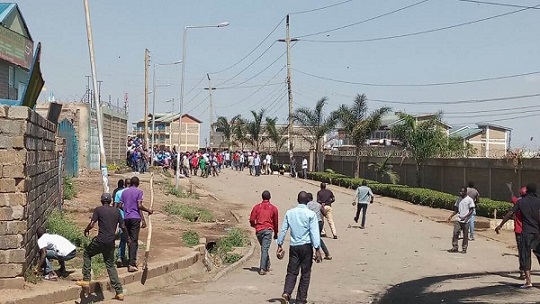 The Catholic Bishops in Kenya are calling for “calm and sobriety” following killings and property destruction in sections of Nairobi city over the weekend.

“We, the Kenya Conference of Catholic Bishops, are saddened by the news that some Kenyans have lost lives in some areas of Nairobi and Nyanza,” reads in part a statement signed by the Chairman of the Bishops’ Conference, Bishop Philip Anyolo of Homabay.

According to reports in local Dailies, sections of Nairobi city have been tense after five people were killed, three of them having been hacked to death by an armed gang in the capital city’s Baba Dogo area, and a fourth one, a security guard, having been shot as he pleaded with the gang not to attack residents.

A fifth person who was found dead in Nairobi’s Mathare North suburb had stab wounds.

“We condole with the families that have lost their loved ones in these unclear circumstances, especially in the recent past,” Bishop Anyolo says on behalf of the Catholic Bishops in Kenya.

The police in Nairobi, through their leader Japheth Koome, have claimed that the killings were of criminal nature, dismissing claims of ethnic clashes expressed by affected residents.

The Catholic Bishops have appealed “to all politicians and other people to work toward unifying the country and shun divisive politics and reckless utterances which lead to animosity and violence.”

“We also call upon the government and its security agencies to protect Kenyans and their properties from criminals, regardless of their political affiliation,” the Bishops have stated.

They have further called on Government security agencies to bring “to book all the criminals currently perpetrating violence on poor Kenyans by killing, destroying property and disrupting businesses.”

The Bishops count on the help of the National Cohesion and Integration Commission, Kenya National Human Rights Commissions, the Directorate of Public Prosecution and other agencies in the process of judging and prosecuting those engaging in violent acts.

On Monday, November 20, Kenya’s Supreme Court upheld the re-election of President Uhuru Kenyatta after a repeat poll through a unanimous decision, with some sections of the country celebrating and another section expressing displeasure.

“We urge all Kenyans to embrace peace and resist any attempt to persuade them in engaging in criminal activities,” the Catholic Bishops have said and urged the youth “not to allow themselves to be manipulated by politicians to cause violence and destroy property.”