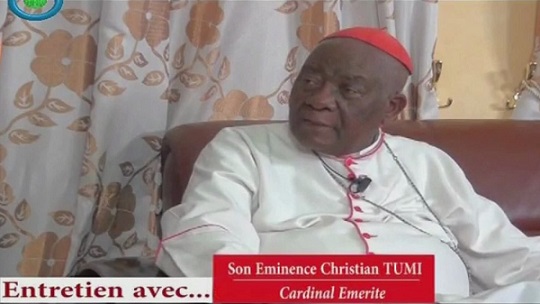 Cardinal Christian Tumi, the archbishop emeritus of Douala, says a French government policy of preventing “Anglo-Saxon” encroachment in French-speaking Africa is behind Cameroon’s current ‘Anglophone Crisis.’ Protests by the African country’s English-speaking minority have turned violent, and a series of bombs went off overnight between Sunday and Monday.

A cardinal in Cameroon has lashed out at France over the ongoing ‘Anglophone crisis’ in the West African country.

Protests in the region are becoming increasingly violent, and four homemade bombs went off in the Bamenda – the capital of the English-speaking North-West region – late Sunday night and early Monday morning. No casualties were reported.

Over a dozen people have died in demonstrations against alleged government erosion of the rights of the English-speaking population, leading some protestors on Oct. 1 to declare the region – which they call Ambazonia – to be independent.

Speaking exclusively to local weekly newspaper, The Rambler, Tumi, now 87-years-old, said that after the reunification of Cameroon, “the idea was to wipe out from Cameroon the Anglo-Saxon culture.”

The cardinal supported his accusation by telling an anecdote from a visit to the French embassy in Rome.

“I was in Rome for the Synod of Bishops and the French embassy invited us for a reception; those of us who were from the French-speaking countries. So, I was there and one of the workers in the embassy approached me and asked me which country I came from. I told him that I was from Cameroon…he immediately told me: ‘We are very happy that you are assimilating the anglophones,’ which means that was the policy of France,” Tumi told the newspaper.

The cardinal also saw French meddling behind the irregularities in the country’s 1992 presidential election, which involved an anglophone, John Fru Ndi.

Fru Ndi officially lost the election to President Paul Biya – who first took power in 1982 and rules to this day – by a narrow margin, but opposition leaders accused the government of fraud.

“Everybody knows that Fru Ndi won the election in 1992. Who organized the coup? It was Mitterrand and I am citing something [French President François] Mitterrand said to Biya, ‘jamais un anglophone a Etoudi’,” Tumi said.

The phrase means ‘no anglophone should ever be allowed in Etoudi.’ The Etoudi is the Cameroonian presidential palace.

Mitterrand served as president of France from 1981-1995. His government sought to strengthen ties with French-speaking Africa, and he sought to prevent “Anglo-Saxon” encroachment in what he felt was France’s sphere of influence.

The cardinal concluded that “what is creating the whole problem is the presence of France in Cameroon. Whereas the English people left, whereas they packed their boxes and everything and went away, Cameroon is controlled by France. That’s the problem.”

Tumi was speaking about the country’s unique colonial history.

Cameroon came under French and British rule following the defeat of the Germans in World War One.

The two parts later gained independence in 1960 and 1961 and reunited under a federal republic. This federation was scrapped in 1972 following a referendum, which has now come under severe criticism by anglophone Cameroonians, who make up about 20 percent of the population.

They have been complaining that doing away with the Federal constitution which provided protections for their culture and way of life was the first step towards annihilating the anglophone culture.

The unrest came to a head in October 2016, when teachers and lawyers in the two English-speaking regions of the country took to the streets in protest over the use of the French language in anglophone schools and courts.

The demonstrators soon called for a return to the Federal system of governance, and others for outright secession.

A year after the protests began – on October 1, 2017 – an estimated 1.5 million people took to the streets in almost every village in anglophone Cameroon in celebration of their independence – even if it was just symbolic.

Joseph Wirba, an opposition member of Cameroon’s parliament who has been vocal about anglophone marginalization said the number of people who marched was a victory over oppression.

“The slave had risen indeed to break the chains and there was no turning back! That day had marked the people’s mental and psychological escape from oppressive strangulation by a merciless government,” he said.

After government troops clashed with protestors – leading to several deaths – the Catholic bishops in the anglophone regions accused the government of carrying out a “genocide.”

They were reacting to the comments made by the Minister for Communications, Issa Tchiroma Bakary, who called the anglophone protesters “terrorists,” and added they should be treated as such.

Upon return from those missions, Yang told the president the use of charged language – such as calling protestors terrorists – was not helping.

“Anglophones as far as I know, are not terrorists. The people were civilized; the majority of them rejected violence; they prefer to solve their problems through republican values,” Yang told Cameroon’s state broadcaster, CRTV.

He said after listening to the people on the ground, he had come to the conclusion that the government must seriously address the crisis.

Tumi said he believes reverting to the country’s original federal system of government would largely address the problem.

That is also the view of the Civil Society Consortium that has been leading the anglophone protests.

Its leader, lawyer Felix Agbor Balla, who was recently released from jail after serving over six months without any judgment, told the BBC that the position has not changed.

But Biya, in power for 35 years now, has repeatedly said none of those demands will be met.

And so the standoff will continue for the foreseeable future.