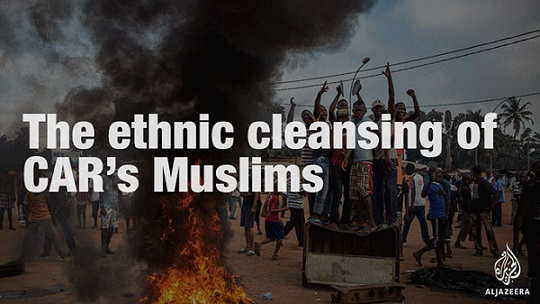 Catholic leaders in the Central African Republic are “outraged” over the calls by a self-styled Church defense group for Christians to carry out revenge attacks on Muslims.

The spokesperson of the self-appointed League for the Defense of the Church, François Nzapakéyé, signed a communiqué July 7, calling on Christians to engage in revenge killing against Muslims.

“Since the beginning of the war, the Church has never stopped from being the target of attacks,” the communiqué reads, and blasted the head of the Catholic Church in the country, Cardinal Dieudonné Nzapalainga and the government for failing to address the continued killing of Church leaders in the conflict-ravaged nation.

“Priests and pastors are systematically assassinated,” they said in the communiqué, and cited Father Paul Emile Nzalé, murdered during an attack by 200 armed men who struck the Notre Dame of Fatima Church on May 2.

“The priest was assassinated like a dog,” the “league” statement said.

The statement also mentioned several other Christian clergymen killed in the country over the past year.

“We, Christians of the Central African Republic want the national and international community to know that we will avenge the killings of the many Church leaders and men of God, killed in the exercise of their functions. Muslims or Christians, we shall see,” the “league” threatened.

The bishops responded by condemning the organization, and said they were involved with “anti-Christian activities.”

They called on the faithful not to give into faith-based manipulation and incitement to hate.

“We believe in Jesus Christ, the face of the Father’s mercy, who saves us from sin and its consequences…He came to unite men and women with God and bring them together in a big spiritual family. He distinguishes himself from over-zealous nationalists by preaching non-violence and love of the enemy,” the bishops’ statement continued.

Government institutions have also joined religious bodies in condemning the incitement to hate. On July 10, the Higher Communication Council of the Central African Republic brought together ecclesiastical authorities, the association of Central African bloggers, the collective of Central African Muslim organizations (COMUC) and many other structures to unanimously denounce that message of hate.

“We, leaders of the media and the civil society in the Central African Republic, insist that the statements of this so-called ‘League for the Defense of the Church’ which denounces what it considers the lethargy of Church leaders as well as national and international institutions in the face of the crimes committed in the Central African Republic are erroneous and unfounded, and are intended to sow trouble among the population, divide the people and stall the efforts made in the interest of peace and living together.”

The country has experienced instability since 2013, when Seleka, a Muslim-majority militia movement, overthrew the government. The Christian-dominated Anti-Balaka militia then formed to fight the Seleka. French and African peacekeepers were deployed in January 2014 and drove the Seleka forces from the capital, Bangui.

With the government unable to exert authority beyond Bangui, armed groups and militias have taken control of more than 70 percent of the country.

The United Nations says the conflict has left at least 1.1 million people destitute and homeless, with about 2.5 million people – more than half of CAR’s four million inhabitants – now in need of humanitarian assistance.

Pope Francis visited Bangui in 2015 and met with Muslim leaders, emphasizing the need for inter-religious peace and dialogue.

Christians make up about 80 percent of the population of the Central African Republic, and Muslims about 15 percent.

The Muslim population is concentrated in the north of the country that touches on the Sahel region of Africa, although there are many Muslim traders in the south.

The country’s religious authorities have long sought to avoid painting the conflict as religion-based, and blamed external forces for trying to divide the country.

The country’s bishops have emphasized the need to “correct the confusion propagated by some national and foreign media giving the impression that the conflict has to do with religion, whereas it is above all else, a political and military conflict.”