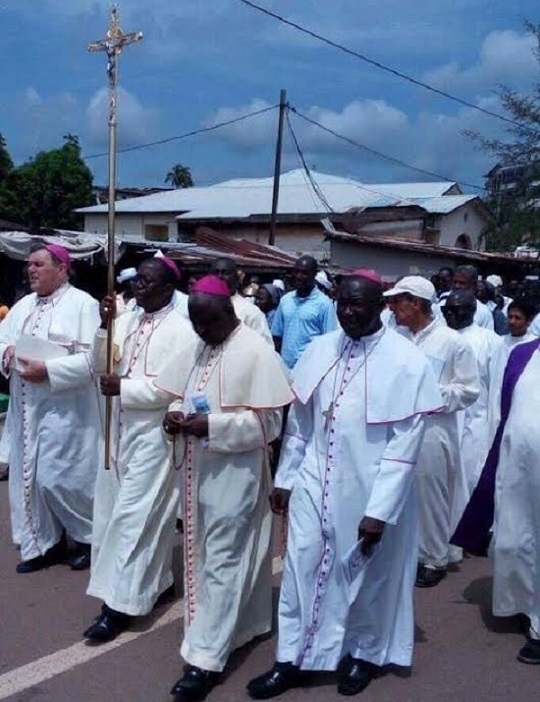 The Catholic Bishops of Sierra Leone have appealed to all agents of the evangelizing mission of the Church to actively foster a spirit of peaceful co-existence as the country prepares for the general elections slated for March 7, 2018.

The plea is contained in the Bishops’ pastoral letter sent to CANAA on Friday, July 7 titled, “Journeying towards peaceful and credible elections.”

“We strongly enjoin our priests, religious and lay faithful to promote a spirit of unity, reconciliation, tolerance and peace in their sermons, homilies, conferences and pastoral engagements,” the Bishops state in their letter dated June 4, 2017.

“We, the Catholic Church, make a commitment to uphold, teach and preach all the tenets contained in this pastoral letter,” the Bishops have said and called “on all Sierra Leoneans, especially those who are of voting age, to strongly reject all acts of violence, unnecessary provocations, various forms of fraud that distort results, as well as anything that can lead to destabilization and disorder.”

They have also encouraged all political parties and their supporters to accept the outcome of the elections, “should the latter be declared free and fair by the competent authority.”

Below is the full text of the Bishops’ pastoral letter ahead of the parliamentary, local and presidential Elections scheduled to take place on 7th March 2018.

JOURNEYING TOWARDS PEACEFUL AND CREDIBLE ELECTIONS

A Pastoral Letter on the Elections in March 2018

We greet you in the name of the Risen Lord; and pray that we may all pass over from death to life and that raised from the dead by the Father’s glory, we too might, live a new life (cf. Rom. 6:4).

We, the Catholic Bishops in Sierra Leone, upon prayerful reflection, issue this pastoral letter in view of the parliamentary, local and presidential Elections scheduled to take place on 7th March 2018.

As your Bishops, we have a responsibility to lead souls to greener pastures. It is our duty to engage in the dialogue over our country’s future and the Sierra Leone we want for all. Pope Paul VI reminds us that “It is up to Christian communities to analyze with objectivity the situation which is proper to their own country, to shed on it the light of the Gospel’s unalterable words and to draw principles of reflection, norms of judgment and directives for action from the social teachings of the Church.” (Octogesima Adveniens no. 4).

We express our sincere gratitude to the President, Dr. Ernest Bai Koroma, for announcing in good time the date for elections, thereby allaying all fears that the elections might be unduly delayed or even postponed. This, in our view, is a major support to the promotion of peace and stability and a boost to our young democracy.

We also appreciate the support given by the International Community to this country and its people, especially in moments of dire need.

In a special way we acknowledge the tremendous efforts and sacrifices of Sierra Leoneans both at home and abroad in ensuring that progress is made in our nation that has suffered for far too long. Our nation was brought to her heels as a result of the Ebola epidemic that claimed thousands of valuable lives. Our resilience as a people and a nation was tested severely. However, it was at that very difficult moment when the nation united to fight a common enemy. The words of St. Paul to the Corinthians were a great consolation during our desperation: “We are in difficulties on all sides, but never cornered…we have been persecuted, but never deserted; knocked down but never killed” (2 Cor. 4:8-9). We therefore encourage all those who stood by us during those challenging moments to accompany us again towards free, fair and credible elections.

The Risen Christ Our Light and Strength

We can only build better families, communities and our country when Christ leads us with his light and when he becomes the propelling force of our decisions and actions. And so we ask for forgiveness for the many times we have allowed our darkness to overcome the Light that has been given to us. The darkness of our sins – our pride, our selfishness, tribalism, nepotism, corruption, greed – has tried to put out the Light in us. We pray that the light of Christ rising in glory may dispel the darkness of our hearts and minds.

Dead to Sin and Living in the Newness of Christ

We are dead to sin when our old self was crucified with Christ. We died to sin when Sierra Leoneans were able to overcome their differences and negotiated peaceful resolution to the ten years of civil war. So many innocent lives were lost. The terrible war was as a result of the many wrong decisions made without the guidance of God and the common good of our brothers and sisters. “Usually war is a funeral procession of violated human rights” (Catholic Bishops of Angola 1993). Greed, corruption, moral decadence, indifference to the common good took over us. And there was darkness all over the land. To use the words of our predecessors during the civil war: ‘while war spells misery and untold sufferings for thousands of people, for others it seems to be ‘good business’ (Sierra Leone Bishops Lenten Message 1993).

The outbreak of the Ebola Virus Disease (EVD) showed the best and worst in us as a nation. On one hand, it revealed quite shockingly the poor state of our medical services. On the other hand, patriotic medical practitioners and other health workers endeavoured to fill in the gaps by making immense sacrifices and some paid the ultimate price with their lives to defeat the virus. The Ebola epidemic is remembered as one of the darkest moments in our history. The twin tragedies in our nation, the civil war and the Ebola epidemic, brought Sierra Leoneans together from all walks of life to fight for a common purpose. Our ethnic, cultural and religious differences were put aside in order to achieve a higher good. Such desirable attitudes that we manifested so clearly at critical moments in our history should be shown again as we move towards the national elections in 2018 that will define the next phase of our country’s history.

Work for the Common Good

We appeal to all Sierra Leoneans to work for the common good. We have to assume responsibility for our own development and not to wait for others to do it. Our progress must be borne on our shoulders and then others will follow us. When adversity affects us we all suffer. Ebola, civil war and conflict did not have a party colour. All Sierra Leoneans suffered. Our commitment brought an end to the civil war and the Ebola epidemic; it renewed our democracy and peace and brought infrastructural growth. We need this same dedication and commitment to address poverty, illiteracy, food insecurity and corruption. Let us put communities at the heart of development and then our country will experience true prosperity that benefits everyone.

The Present Political and Economic Landscape

We note with deep regret that the present political landscape does not promote unity among us. Politically we are divided into North-West and South-East. We have promoted a politics of regionalism. In 2007, we breathed a sigh of relief for the peaceful presidential and parliamentary elections and the emergence of the then opposition party, All Peoples Congress (APC) as the victor. Ten years on we have not attained the united and peaceful Sierra Leone we all dreamt of. Many citizens continue to stomach grievances and on many occasions peaceful demonstrators have been treated with heavy hands and some brutally killed. How fast our hopes and aspirations have diminished!

We are aware that significant gains were made in economic growth, especially between 2012 and 2014. Our nation was rated as one of the fastest growing economies in sub-Sahara Africa. But we were told that the twin shocks of Ebola and the fall in iron ore prizes worldwide led to austerity measures. But is it austerity only for a few; the poor, helpless and vulnerable?

Expressing Unity as a People and Freedom to Exercise Electoral Franchise

As a Church we should not afford to shy away from political participation but our involvement cannot be partisan. In no way can we as a Church champion the cause of any political party. Our cause is a noble one; namely to defend our country and its citizens from political manipulators and to educate all citizens to vote wisely and responsibly. Ours is therefore an advocacy role. We inform, instruct and educate our youth and indeed all citizens to stay away from violence and anything else that might cloud the election process.

We call our leaders to attention about the dangers of youth unemployment. We challenge them to make genuine efforts to stamp out corruption and put an end to impunity. We call on the political class and especially political parties to be responsible in shaping the political culture of our nation. Divisiveness, political bickering and infighting do not augur well for the consolidation of our young democracy. After many years of independence, our political parties should have, by now, institutionalized tolerance, ethnic diversity, respect for the rule of law and the rules of the game leading to trust and confidence by the general populace in the democratic process. We call on the Government to resist the temptation of political manipulation and to do everything possible to create a level playing ground for all political parties. No attempt should be made by anyone to change the will of the electorate. All Sierra Leoneans who have reached the required age have a right and a duty to register and vote. Do not turn your back to the political process.

In the light of the foregoing considerations:

1. We call on all Sierra Leoneans, especially those who are of voting age, to strongly reject all acts of violence, unnecessary provocations, various forms of fraud that distort results, as well as anything that can lead to destabilization and disorder.

2. We encourage all political parties and their supporters to accept the results or outcome of the elections, should the latter be declared free and fair by the competent authority.

3. We urge the Law Enforcement officers to safeguard honour and loyalty to this country and its institutions, the protection of lives and property, and to maintain political neutrality in the execution of their duties.

4. We persuade political parties and presidential candidates to respect the electoral process, to preserve peace, to uphold the interest of the Sierra Leonean people and to see themselves in this pluralistic election as competitors, not adversaries. In fact, Pope John Paul II said, “an authentic democracy, which respects pluralism, is one of the principal routes which the Church travels together with the people. Being engaged in the democratic struggle according to the Spirit of the Gospel is a sign of a Church which participates in the promotion of the rule of law everywhere in Africa” (Ecclesia in Africa no. 112).

5. We, the Catholic Church, make a commitment to uphold, teach and preach all the tenets contained in this pastoral letter. We strongly enjoin our priests, religious and lay faithful to promote a spirit of unity, reconciliation, tolerance and peace in their sermons, homilies, conferences and pastoral engagements.

In conclusion, we pray that Mary, the Queen of Peace, continue to intercede for us so that her Son may grant us the grace and the strength to follow the light and walk to newness of life in Christ.

Given in Freetown, on the fourth day of June in the Year of Our Lord Two Thousand and Seventeen; the Solemnity of Pentecost.

Bishop Charles A. M. Campbell, Catholic Diocese of Bo and President of Conference